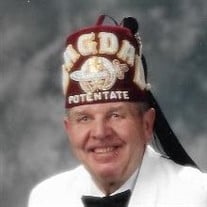 Mr. Ervin L. Niemi passed away Friday evening, October 19, 2018 at Genesis Health. Erv was born in the sauna on the family homestead on Wednesday, June 8, 1930 near Sebeka, Minnesota. He was the only child of Iver and Hilma Niemi, attending grade school in Sebeka and in Minneapolis, and high school in Minneapolis and Spooner, Wisconsin. He graduated from Spooner High in 1949. Erv enlisted in the U.S. Navy in 1950 serving during the Korean War, as an aircraft flight mechanic on the USS Bennington. After his discharge in 1954, he moved to Butte and married Edwina M. Kirk on June 30, 1956. They were married for 42 years prior to Edwina’s passing in 1998. Together they raised their family, and traveled the country with their kids and the Shriners, while operating the Helsinki Bar, an anchor of Finn Town. Erv brought the tradition of St. Urho from Minnesota to Butte in the 1970s, which remains a Butte tradition today. Along with a small group of Shriners, he also helped to create the Burikka Patrol, a group of Shriners who toured the Northwest raising funds for children’s hospitals with his burros, an elk, and go carts. Erv was very proud of his membership as a Mason and a Shriner. He was Past Master of Butte Lodge # 22, A.F. & A.M., active in the Bagdad Temple of the Shrine, the Butte Scottish Rite Bodies, the Janizary Patrol, served as Worthy Patron for the Job’s Daughters and was an active member of the Royal Order of the Jesters. He served as the Bagdad Shrine Potentate in 1996. Erv was also an avid hunter and fisherman, but his first love was trapping and fur trading. Many throughout Montana worked with Erv to bring their furs to market, always at Erv’s price, and always sealing the deal with a Helsinki Bar calendar. Erv lived life to its fullest. He enjoyed time spent at his property at Georgetown Lake, where he could partake in his traditional Finnish sauna. He also enjoyed interacting with his many patrons and friends at the Helsinki Bar. He was very proud of his Finnish heritage and the Finnish spirit of self-reliance and toughness (SISU), and he was equally proud of his service to our country. Erv is survived by his son and daughter-in-law, Kirk Niemi and Janet Ahlquist-Niemi of Edmonds, Washington, daughter and son-in-law, Marie and Patrick Seccomb of Butte, grandchildren, Emma and Anthony Seccomb, and special companion Denise LeDuc, as well as longtime faithful friend Glen Blom. He was preceded in death by his parents Iver and Hilma, and his wife Edwina. In lieu of flowers, donations may be made to the Bagdad Shrine Transportation Fund or donor's choice.

Mr. Ervin L. Niemi passed away Friday evening, October 19, 2018 at Genesis Health. Erv was born in the sauna on the family homestead on Wednesday, June 8, 1930 near Sebeka, Minnesota. He was the only child of Iver and Hilma Niemi, attending... View Obituary & Service Information

The family of Ervin Lawrence Niemi created this Life Tributes page to make it easy to share your memories.

Send flowers to the Niemi family.