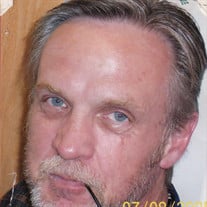 Eugene Robert Wagner Sr. passed away Thursday evening, March 21, 2019, at his home in Butte. He was born Sunday, October 21, 1956 in Butte to Arlene Saari Wagner. He married Cindy Cisneros on August 30, 1974. The later divorced in 2005. The had three children, Melissa, Lisa Gransbery (Cory) and Gene Jr. (Kami). He was blessed with nine grandchildren and two great-grandchildren. Gene spent his early years in life working in the Kelly Mine, the Lucky Friday and the Sunshine in Idaho. He later moved to Spokane, Washington where he took up carpentry. He loved the outdoors and always had a back pack on. Camping and fishing were his Heaven. Gene was preceded in death his daughter, Melissa, mother, Arlene Wagner, brothers, Rick, Dave and Steve Wagner. Gene is survived by his daughter, Lisa and son Gene, grandchildren, Samantha, Nolan, Wyatt, Chelsey Allison, Jordan, Barbra and Elijah, great-grandchildren, Macie and Mason brother, Bill Wagner (Connie) of Gillette as well as his nieces and nephews, Stephanie, Michael, Heather, Crystal, Brandon and Rick. Cremation has taken place. Services will be conducted at a later date and will be announced.

The family of Eugene Robert Wagner created this Life Tributes page to make it easy to share your memories.

Send flowers to the Wagner family.