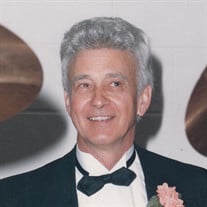 Longtime railroad worker and well-known musician, Floyd George Collins went to his new home in Heaven on Sunday, September 15th. He was 92. Born on Mother’s Day, May 8, 1927, in Opportunity to Floyd and Anna (Gruss) Collins, he attended school in Basin and Anaconda. He joined the Army as a teenager and served in occupied Japan following World War II until the untimely death of his father brought him home to care for his mother and siblings. He married Floy Marie Field on July 17, 1955 in Anaconda. They bought the Touraine Apartments in Butte, later renamed the Collins Apartments in the mid 1960’s and ran those until 1992. Floyd loved music and could fix anything, talents he passed on to his sons. He was the original drummer for the Renegades, a popular local rock ‘n roll band in the 1950’s that was featured in a weekly newspaper series a few years ago. He also played with other groups including at Journey Church where he and Floy were longtime dedicated members. He worked for the Butte Anaconda and Pacific Railroad as a machinist for 44 years and maintained membership in its retirees’ group until recently. Also an accomplished cook, his baklava, candies and breadstick were prized holiday gifts. One thing often said about Floyd is that he was truly kind, willing to help anyone, anytime, whether it be a meal for a stranger whose car broke down on the nearby interstate or emergency repairs for a friend. He is survived by his wife of 64 years, Floy; sons and daughter-in-law, Dana Collins, Jory Collins and Todd and Norma Collins; former daughters-in-law, Cheryl Collins and Barb Collins; grandchildren and spouses, Sara and Jason Anderson, Jake Collins, Amber and Layne Denning, Nick and Roxan Collins, Tayler and Jared Murphy, MacKenzie Collins and Allison Collins. Great-grandchildren include Hailee Anderson, Kinzley Collins, Liam Collins, Tucker Denning and Piper Denning. Also surviving are his sister, Lauretta Hancock, brother-in-law, David Field and numerous nieces and nephews. Floyd is preceded in death by his parents, sisters, Elain Dalbec, Frances Heaphy, Lucille Collins and Bernadine Thompson and brother-in-law, Bill Field.

Longtime railroad worker and well-known musician, Floyd George Collins went to his new home in Heaven on Sunday, September 15th. He was 92. Born on Mother&#8217;s Day, May 8, 1927, in Opportunity to Floyd and Anna (Gruss) Collins, he attended... View Obituary & Service Information

The family of Floyd George Collins created this Life Tributes page to make it easy to share your memories.

Send flowers to the Collins family.