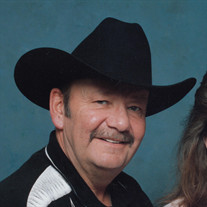 Frank Raymond "Buck" Konola Jr. passed away Tuesday morning at his home in Butte with his loving wife and family at his side. He was born in Butte Friday, May 9, 1947 to Frank and Phyllis (Fellows) Konola. He attended Butte schools including the Greeley, East Junior High and Butte High School. Frank proudly served his country for three years with the United States Army during the Vietnam War and following his honorable discharge, returned to Butte where he worked in the boilermaker trades retiring from the Boilermakers Union # 11 after 33 years of service. Frank was a Montana Boy, born and bred. He loved the outdoors including hunting, fishing and camping. He was a member of the Butte Gun Club, Duck Unlimited and had been a member of the Rocky Mountain Elk Foundation. He married Kandace Keil on June 19, 2003 and she survives. Also surviving are his sons and daughters-in-law, Keith and Laura Konola of Helena and their daughter Ashley, Dan and Shayla Erskine of Alaska and their children, Louden, Sandra, Tyler and Hunter, Zak Podgorski of Butte, his sisters and brothers-in-law, Terry and Bernie Driscoll of Bozeman, Kim and Phil Gregory of Helena, his brother, Peter Konola of Butte, mother-in-law, Shirley Percival of Butte, sister-in-law and brother-in-law, Kim and Jerry Carpenter of Butte, nieces and nephews, Patrick and Felicia Driscoll of Helena, Annie Driscoll and Max Harrell of Las Vegas, Joshua and Felicia Gregory of Arizona, Sara and Brandon Newton of Arizona and Izabella and K.J. Carpenter of Butte. Also surviving is his sidekick, Buster. He is preceded in death by his parents Frank and Phyllis Konola and his son, Kiel Podgorski, who passed away October 31, 2013, father-in-law, Bob Keil and his wife Sandy Konola. Memorials may be made to the Highlands Hospice, Shrine Hospital for Children or Our Lady of the Rockies.

Frank Raymond "Buck" Konola Jr. passed away Tuesday morning at his home in Butte with his loving wife and family at his side. He was born in Butte Friday, May 9, 1947 to Frank and Phyllis (Fellows) Konola. He attended Butte schools including... View Obituary & Service Information

The family of Frank R. "Buck" Konola created this Life Tributes page to make it easy to share your memories.

Send flowers to the Konola family.