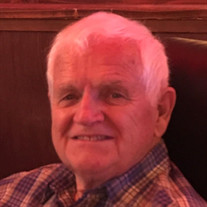 Frank Parrett passed away due to complications from back surgery on January 17, 2019 surrounded by his loved ones. Frank was born on May 18, 1935 to Walter and Ruth (Rand) Parrett. He attended Whittier Elementary School and graduated from Butte High School where he played football and was later inducted into the Silver/Golden B’s. In his early 20s, he was a Copper League pitcher who was later inducted into the Butte Sports Hall of Fame in 2003. His Copper League experiences included pitching against the country music legend, Charley Pride. On October 12, 1957, Frank married the love of his life, Carol Goldsworthy, and this past year celebrated their 61st wedding anniversary. Their union produced three daughters, three granddaughters, a great grandson, and great granddaughter who loved him dearly. Frank was employed by the B A & P railroad as a switchman and later was a hod carrier/finisher for both Stodden and LeProwse Plastering. He ended his working career after 16 years as a maintenance engineer for the Butte School District. Frank was a devoted family man sharing his love for fishing, camping, gardening, golf, and skiing. When not with his family, he loved his time on the links at the Muni and was very proud to have exceeded his dream of achieving a hole-in-one not once but twice. He traveled to Portland to attend PGA tournaments and was thrilled to have met his golf idols Arnold Palmer and Jack Nicklaus. He was preceded in death by his parents, sisters Alice (Dale) Roslosnik, Lois (Bill) LeProwse, and Flip Rand, sister-in-law Cecelia Parrett, and nephew Roy Tremis. He is survived by his beloved wife, Carol; daughters Brenda (Diana) Parrett, Sue (Terry) Kramer, and Sandra (Rich) McGeever; grandchildren Michelle (Mike) Wirth, Courtney (Bryson) Cozzie, and Stacey Skuletich; great-grandchildren Nick and Laci Wirth; brothers Lee Parrett and George (Marilyn) Parrett and numerous nieces and nephews. The family wishes to thank Dr. Russo and the staff of St. James Healthcare for their kindness and care. In lieu of flowers, memorials may be sent to the George Tierney Scholarship Fund at Butte High School or the Butte Carousel project. Frank, Dad, Papa- The void in our hearts will always ache for your mischievous grin and playful charm. We love you and will miss you so much until we meet again.

Frank Parrett passed away due to complications from back surgery on January 17, 2019 surrounded by his loved ones. Frank was born on May 18, 1935 to Walter and Ruth (Rand) Parrett. He attended Whittier Elementary School and graduated from... View Obituary & Service Information

The family of Frank Walter Parrett created this Life Tributes page to make it easy to share your memories.

Frank Parrett passed away due to complications from back surgery...

Send flowers to the Parrett family.