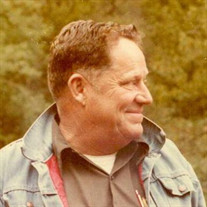 Fredrick O’Rourke “Fritz” Hossfeld passed away quietly Thursday afternoon, June 4th, 2015 at his home in Butte. He was born in the old St. James Hospital on the first day of winter, December 21, 1925 the second of seven children to Fred and Anna (O’Rourke) Hossfeld. He was raised in Butte, Basin, Boulder and Radersburg and graduated from Jefferson County High School in 1943. Fritz served his country with the United States Navy during World War II aboard the USS Healy and saw many battles in the Pacific. Following his discharge he returned to Butte and then attended Montana State University in Bozeman planning to be a teacher. After many hungry semesters there he returned to his true calling and that was a dozer operator and road construction. It would be pretty difficult to drive any distance in Montana without driving on a road that he was in some way involved in. Whether it was for F& S Construction, Zook Brothers, Sletten Construction, Gilman or A & H Construction that he and Jim Hendrickson started together. On May 17, 1957 he and Loretta Waldie were married in Butte and together they had five children. She passed away February 19, 1998. Besides his wife, he is also preceded in death by his sister, Mary Hossfeld, brothers and sister-in-law, Patrick Hossfeld, Robert Hossfeld and Jim and Nina Hossfeld, as well as his brother-in-law, Wayne MacFarlane and son-in-law, Bill Williamson. He is survived by his sisters JoAnne McFarlane of Boulder and Alice Hossfeld of Fairbanks, Alaska, his children and their spouses: Theresa and Archie Jenkins of Centralia, Missouri, Mike Hossfeld and Robin Steffan-Hossfeld, John Hossfeld and Kirk Wells, Kathleen Holmes and Susan Hossfeld. Also surviving are his grandchildren: Fredrick and Amber Jenkins, Aaron and Stephanie Jenkins, Philip and Johanna Jenkins, Loretta Jenkins, Michael Jenkins, Nikki and Scott Hansen, Brandon and Aimee Hossfeld, Eleana and Nick McGree, Ann and Chris Johnson, Ashley Holmes and Mitchell Landreth, Amber Hendrickson, Nathan Williamson and Ryan Williamson. Great-grandchildren include: Adam and Andrew Jenkins, Gabriel and Gavin Jenkins, Brooklynn and Alison Hossfeld, Hailey, Kylie and Tyson Hansen and Matteo and Anthony Johnson. Also surviving are three yet to be born great-grandchildren, Grayson Jenkins, Archie Jenkins and Everett Jenkins, Robins children and grandchildren: Courtney and Jon and their children Cassie, Gracie, Tatum and Benjamin, Sam and Nathan and their children Trey and Chone, Ian and Kayla, Alley and Andy and their children Holden, Austin and Paston as well as numerous nieces, nephews and cousins and many treasured relatives in Loretta’s family.

The family of Fred O. Hossfeld created this Life Tributes page to make it easy to share your memories.

Send flowers to the Hossfeld family.