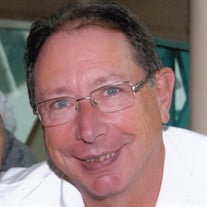 Our loving father and husband, Gary Chatriand left this earth to begin his heavenly journey, on November 1,2017. Gary arrived on May 9th, 1952 to Joe and Betty Chatriand in Butte. He attended Monroe Elementary School, East Junior School and Butte High School. After graduating, he attended Montana Tech, graduating in 1975 with a degree in Chemistry. Very soon after completing his education, he started his career at Stauffer Chemical. He also worked at FMC in Pocatello. However, his love of Butte, brought him home and he began working for a new company called Mycotech, later becoming LAM International, as President of Manufacturing and General Manager. He grew a very successful manufacturing company from ground zero. Gary went on to oversee and facilitate the growing of this business into a worldwide company. Gary married Rosemary McNellis ln 1973and from this union, three sons were born. Allen, Craig, and Paul. In 2001, Gary married Lacrecia O'Neal from Texas and from this union, he became a step-father to two more sons, Brandon and Brent Allen. Gary enjoyed life and lived life to the fullest. Some of his passions were camping, fishing, hunting, snowmobiling, 4-wheeling and handball. Some of his favorite places to be included the Big Hole and Madison Rivers. But the greatest joy in his life was doing these activities with his family. Gary had a large family, and he enjoyed spending every minute of his life that he could, with this family. Gary loved to share his wealth of knowledge and scientific background, as a volunteer. He served on the Jefferson Watershed Committee for many years, culminating in water and drought management for the Jefferson River. Additionally, the George Grant Chapter of Trout Unlimited benefited from many years of Gary's service, serving many times as President. Gary also volunteered as an active member of the Montana Tech Alumni Association. As a Little League coach, he taught many Butte kids how to play baseball, basketball and football. Gary had a belief in making the world a better place for his children and grand-children. Gary was preceded in death by his parents Joe and Betty Chatriand, and his step-mother, Betty Jean. He was also preceded in death by his brother Rick, and his step-brothers Chuck Willoughby, Jack Willoughby and Randy Willoughby. Gary is survived by his spouse, Lacrecia Chatriand. He is survived by his three sons and their families. Allen (Bobbie) Chatriand of Wenatchee, Craig (Koryn) Chatriand of Spokane, and Paul (Tamrah) Chatriand of Helena, and his step-sons Brandon (Melinda) Allen of Woodville, Texas and Brent (Tiffany) Allen of Butte. He is survived by his grandchildren Jackson, Gracie, Anna, Mariah, Sara, Blake and Kaitlyn Chatriand, and Cayrden, Bridger, Deacon and Ellianna Allen. He is also survived by his sister Sandy Kuschel of Brainerd, Minnesota and his brother Ron (Susan) Chatriand of Butte. He is also survived by many nieces and nephews. He will always be remembered for his love and compassion, his work ethic, his love for wine, his love of his family and his love of life. He taught us how to live life to the fullest and he led by his example as a gentleman and by his respect and tolerance for others. The family requests that memorials be made to Trout Unlimited or the donor's choice.

Our loving father and husband, Gary Chatriand left this earth to begin his heavenly journey, on November 1,2017. Gary arrived on May 9th, 1952 to Joe and Betty Chatriand in Butte. He attended Monroe Elementary School, East Junior School and... View Obituary & Service Information

The family of Gary Thomas Chatriand created this Life Tributes page to make it easy to share your memories.

Our loving father and husband, Gary Chatriand left this earth...

Send flowers to the Chatriand family.