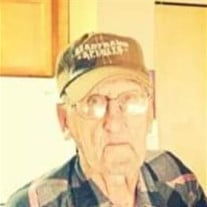 Mr. Gene Ray Taylor passed away Wednesday evening, April 8, 2020 at the Rocky Mountain Care Center in Helena. He was born in Butte Thursday, September 19, 1929 to Ray and Lola (Bergert) Taylor and attended Butte schools. He served in the 38th Infantry of the United States Army during the Korean War and following his honorable discharge, returned to Butte where he attended the College of Technology. He married Lenore Tressider in Butte and owned and operated the Dairy Gold Dairy. During this time of his life his greatest hobby was restoring antique cars. There were many hours and miles spent hunting down parts for the cars he and Lenore restored to new life. Gene later worked for the Anaconda Company and retired as engineer at the Butte Park Royal Nursing Home. He was a member of the American Legion, the Teamsters Union and the VFW. Gene is preceded in death by his wife Beatrix Jo Taylor and his son, Dale Taylor. Survivors include his daughter and son-in-law Donagene (Ray) LaFromboise, daughter-in-law Karen Taylor, step-daughter-in-law, Shelly Edwards Bell, grandchildren: Heath (Erin) LaFromboise, Josh (Becky) LaFromboise, Nicole (Stormy)Tuffield, Miranda (Beau) Parisi, Carly Taylor and Anna Hancock. Also surviving are great-grandchildren Madisyn, Leighton, Chloe, Maysa, Colt, Delaney, Lennon, Everly, Beckett, Jillian, Hendrix and Rhys all of Helena and his constant helper in these last 10 years of his life and mother of his children Lenore Duel. Cremation has taken place. Graveside interment services with military honors and a reception will take place at a later date in Mount Moriah Cemetery and will be announced. Special thanks go to St. Peter's Hospice for all their kind and gentle care. Memorials may be made to St. Peter's Hospice, the Lewis and Clark Humane Society, The Willis Cruse House in Helena.

Mr. Gene Ray Taylor passed away Wednesday evening, April 8, 2020 at the Rocky Mountain Care Center in Helena. He was born in Butte Thursday, September 19, 1929 to Ray and Lola (Bergert) Taylor and attended Butte schools. He served in the 38th... View Obituary & Service Information

The family of Gene Ray Taylor created this Life Tributes page to make it easy to share your memories.

Send flowers to the Taylor family.