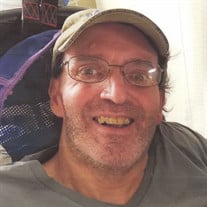 On January 2, 2020, we lost our beloved father, grandfather, brother and uncle to complications from Multiple Sclerosis. Jerry was born on January 18, 1962 in Butte, Montana to Iona (Fink) and Carroll (Mac) McDougall. He was the 8th of 9 children. Jerry attended Longfellow Elementary, South Central Middle School, Central High School and graduated from Butte High School in 1980. Throughout high school, Jerry worked for Orofino Ice Company with his dad, Mac. He then went on to work for UPS and later went on to work for the Port of Montana for many years. Jerry married Twylla Steinmetz in 1985 and from this union he had 2 daughters he adored more than anything, Sarah and Emily. He doted on his girls every chance he got and was an amazing, incredible father. Jerry was a proud member of Search and Rescue for many years. He was a lover of classic cars and owned many different ones through the years such as a Dodge Charger, a Firebird and a VW Bug. Jerry also loved rock music and junk food (but never gained a pound from eating pork chop sandwiches and filet o' fish meals). Anyone that knew Jerry could see his sarcastic and silly sense of humor and his stubborn spirit. In his later years, Jerry enjoyed playing Bingo and singing karaoke. He could often be heard belting his favorite tunes. Even as Jerry lost his ability to walk and speak, he never pitied himself and had a tenacious will to live his life to his fullest ability. He loved his family fiercely and unconditionally. Jerry is preceded in death by his mother and father, Iona (Fink) and Carroll (Mac) McDougall. Jerry is survived by his daughters and son-in-law's, Sarah & Tyler Storey; Emily & John Rivers. His 6 grandchildren, Vann, Eben and Blythe Storey; Greyson, Oliver and Miera Rivers. He is also survived by his 8 siblings and their spouses, Rich & Kathi McDougall, Mike & Linda McDougall, Charlene & Bob Rivera, Dave & Sharon McDougall, Kathy & Bill Hrella, John & Carol McDougall, Tom McDougall, and Barb Collins. He is also survived by his ex-wife, Twylla (Dale) Carpenter and numerous nieces, nephews and a large extended family. Jerry's family would like to thank the staff that cared so much for him at Continental Care and Rehab, Frontier Hospice and the compassionate nurses and doctors at St. James Healthcare that made Jerry comfortable in his last days. A celebration of Jerry's life will be held on Saturday January 11, 2020 at 11 a.m. in Wayrynen-Richards Funeral Home, 1800 Florence Avenue in Butte, Montana. A reception to honor and eulogize Jerry's life will follow. Memorials in honor of Jerry can be sent to the National MS Society. Express condolences at www.wayrynen-richards.com "A life well lived”

On January 2, 2020, we lost our beloved father, grandfather, brother and uncle to complications from Multiple Sclerosis. Jerry was born on January 18, 1962 in Butte, Montana to Iona (Fink) and Carroll (Mac) McDougall. He was the 8th of 9 children.... View Obituary & Service Information

The family of Gerald Allen "Jerry" McDougall created this Life Tributes page to make it easy to share your memories.

Send flowers to the McDougall family.