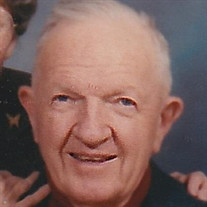 Rev. Glenn E. Truscott was born in Butte, Montana, to Alida, “Lila,” (Hanson) and Glenn E. Truscott in 1921. (Rev.) Glenn spent his pre-teen years on a sheep ranch across the Big Hole River from the small ranching town of Divide, Montana. Upon graduation from the one room grade school in Divide, he’d drive a Model-T to Butte for high school. There he’d often board with an aunt, especially during winters months when driving the Model-T over the pass to Butte was dicey and frigid. After graduation from Butte High School, he joined the US Navy, where he served as an Aviation Machinist Mate and attained the rank of Chief Petty Officer. During WWII Glenn was on the flight deck of the USS Hornet in April of 1942 during the historic launching of (then) Col. Doolittle and his group of sixteen B-25’s for their attack on Japan. A month-and-half later he went through the Battle of Midway. Later, during the Battle of the Santa Cruz Islands, the USS Hornet was again under attack by Japanese dive-bombers. There the order to abandon ship came and the USS Hornet was sunk. Picked up by a destroyer, he was assigned to another aircraft carrier. After the war ended Glenn was on the carrier USS Valley Forge, which sailed around the world promoting peace during 1947 and 1948. That cruise enabled him to visit his English family roots in Cornwall. Then the Korean War started in 1950. Off of that nation’s coast he served on the aircraft carrier USS Philippine Sea. Glenn’s 20-year navy career also saw him on the aircraft carriers USS Lexington and USS Yorktown. Stateside, he was stationed on naval airbases located at Astoria, OR, Coronado, CA, twice near Corpus Christi, TX, and lastly on Whidbey Island, WA. Between the two Texas assignments he was assigned to the Sangley Point naval air base, which was the across bay from Manila, Philippine Islands. Glenn retired from military service on Whidbey Island, WA, in 1960 moving to Deer Lodge, MT, where he became a Methodist minister. This second career took him to many churches and communities throughout western Montana where he was the resident pastor. These were: Townsend, Radersberg, Toston, Fromberg, Edger, Roberts, Cascade, Sunnyside, Sand Coulee, Dutton, Brady, and finally Anaconda. His duties often required him to “circuit ride” two to three of these churches at a time, much like his inspiration: the legendary Brother Van Orsdel, who preached across frontier Montana. Besides conducting funerals at many other churches, Glenn also “pinched preached” at Bannock, Wise River, Butte’s Mtn. View Methodist Church and Clarkston, WA, Methodist Church. In 1944 Glenn married his high school sweetheart, Lenore Waters, whose father was the proprietor of The Hub, a men’s western clothing store that served Butte, MT, for over 50 years. Glenn and Lenore’s wedding took place in Astoria, OR, and left for their honeymoon in a Greyhound bus. Lenore then lived at all of the stateside naval air bases where Glenn was assigned, plus 18 months with him in the Philippine Islands. She also assisted at all of Glenn’s ministry locations. Except for the later churches, Glenn and Lenore moved and served with up to three sons in tow. They were married for 72 years. He retired from the ministry in 1983; moving from Butte, MT, to the Evergreen Estates in Clarkston, WA during 1998. But, Glenn & Lenore continued to travel the globe, mostly on cruise ships. However, Glenn’s favorite sport was fly-fishing the rivers and streams near Butte. He’d often save up his allotted military leave to spend them as a 30 day stretch in Montana visiting relatives and of course fishing. Reverend Glenn died at age 95 and is survived by his wife Lenore, his three sons and their wives: Glenn Jr. & Roberta of Coeur d’Alene, ID, Don & Melody from Bainbridge Is., WA and Tom & Tana in Clarkston, WA. In addition, he has five grandchildren—Seth, Ben, Hana, Ian & Ciera, plus a recent great granddaughter, Iolana. Another great-grandchild is due soon. All his sons, their wives and children enjoy wading northwestern waters, fly poles in hand. Please direct any memorials to the Aldersgate United Methodist Church, 1621 Thornton Ave., Butte, MT 59701 for its music program as he loved to sing in church choirs.

The family of Rev. Glenn E. Truscott created this Life Tributes page to make it easy to share your memories.

Send flowers to the Truscott family.