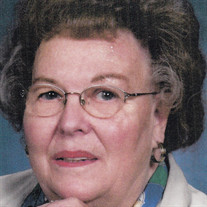 Helen Joan “JoAn” Johnson passed away Monday morning, January 6, 2020 in Butte. She was born Friday, February 1, 1935 in Kimball, Nebraska to Alex and Elizabeth (Engstrom) Christiansen. She was raised and educated in Nebraska and earned her teaching degree there. She and Marvin Johnson were married October 23, 1960 in Kimball, Nebraska and moved to Butte in 1964 when Marvin was hired as a safety engineer for the Anaconda Company. JoAn worked as a substitute teacher in the Butte schools for many years then as a secretary at the Montana Tech Alumni Association for 25 years. She was a member of the Butte Symphony Guild, the Daughters of Norway, the VFW Auxiliary, the WAAIME Club and the Hoedowners Garden Club, later called the Rocky Mountain Garden Club. She was also a longtime and active member of Gloria Dei Lutheran Church, including WELCA. JoAn is preceded in death by her husband, Marvin who passed away December 10, 1980, her sister, Mary Jean Good and her brother, Jim Christiansen. Survivors include her sons and daughters-in-law, Mike and Deanna Johnson of Butte, Steve and Christy Johnson of Elizabeth, Colorado, grandchildren, Logan Johnson, Emilee Johnson and Ryan Johnson as well as several nieces, nephews and cousins in Montana, Nebraska, Washington and Wyoming. Cremation has taken place. Her family will receive friends Friday morning, January 10th at 9 o’clock in Gloria Dei Lutheran Church where memorial services will be conducted at 10 o’clock. Interment will follow in Sunset Memorial Park. Memorials in her memory may be made to WELCA c/o Gloria Dei Lutheran Church, 2300 Florence Ave. Butte, MT 59701.

Helen Joan &#8220;JoAn&#8221; Johnson passed away Monday morning, January 6, 2020 in Butte. She was born Friday, February 1, 1935 in Kimball, Nebraska to Alex and Elizabeth (Engstrom) Christiansen. She was raised and educated in Nebraska and... View Obituary & Service Information

The family of Helen Joan "JoAn" Johnson created this Life Tributes page to make it easy to share your memories.

Send flowers to the Johnson family.