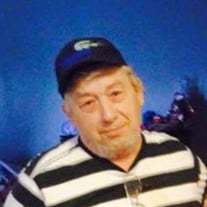 Mr. Henry Edward “Butch” Lawrence passed away Wednesday, November 20, 2019 at his home in Butte. He was born Sunday, March 27, 1949 in Bessemer, Alabama to Henry E. and June (McCracken) Lawrence. The family moved from Alabama to Butte in the early 1950’s and his father was fatally wounded in a hunting accident when He was very young. His mother later married Frank Ramey and together they raised their family in Butte. Butch attended local schools graduated from Butte High School and attended Montana Tech and Vo-Tech. He and Sharon Jurenic were married on May 29,1969 and she passed away January 26, 2012. Also preceding him in death are his parents and a son, Jason Lawrence, his sister, Jamie Williams, brothers, Dan Lawrence and Frank Ramey, brother-in-law, Bernie Jurenic, sister-in-law, Kim Gradl and cousin, Bob Bingston. Butch worked for the Anaconda Company and Later Montana Resources until his retirement and had belonged to the Knight of Columbus many years ago. He was also a member of the Iron Workers Union, enjoyed bowling at Marty’s and the Star Lanes, enjoyed hunting and fishing and was a member of the Professional Clown’s Association with his wife’s uncle, Luigi Jurenic. Butch was also an Eagle Scout as a boy and was a life-long fan of the Chicago Bears and the New York Yankee’s. He is survived by his sons and daughters-in-law, Sean and Yvonne Lawrence and Brad Lawrence and Stana Vernos, grandchildren: Kendall Moore, Kendra Moore, Brittany Lawrence, Kevin “Kevy” McGinley and Lorna Rae. Also surviving are his great-grandchildren, Rachel Stearns, Brayden Johnson and Skyler Moore, his brother and sister-in-law, Tinch and Char Ramey sisters-in-law, Lori Jurenic and Dinah McLeod, brothers-in-law, George Gradl and Bennett Williams as well as numerous nieces and nephews. At his request, cremation has taken place and no services are planned at this time.

The family of Henry Edward "Butch" Lawrence created this Life Tributes page to make it easy to share your memories.

Send flowers to the Lawrence family.