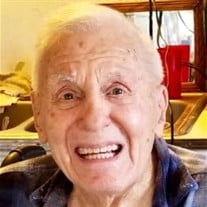 Herbert “Earl” Reynolds 96, passed away surrounded by family on August 31, 2019 in Butte, MT. Earl was born in Butte on May 12, 1923 to William and Marie Reynolds. One of 7 siblings he spent his formative years living on the “East Side” of Butte, attending grade school and high school in Butte, MT. He lived during the “Great Depression” which taught him some valuable lessons that he used all of his life. In 1942 he joined the US Navy and served as a landing craft mechanic in Hawaii during World War II. After his honorable discharge he returned to Butte where he met the love of his life - Lois Herr. They were married in 1952 and several years later (1957) with 3 young boys at home he fell suddenly ill and was hospitalized for 6 months having been stricken with Polio. While in the hospital , his wife gave birth to their 4th child, a girl, the 5th child, a boy was born a few years later. Earl worked in several locations in Butte in the 50’s, including the Milwaukee Railroad and Newbro Drug – a pharmaceutical warehouse. Sadly in 1987, he lost his wife at the young age of 55 & never truly got over it. Earl, despite his hardships, remained a cheerful generous, engaged and loving father, grandfather, brother, uncle and friend. His loss is deeply felt among all who remain. He really enjoyed playing the guitar along with his wife. They played in several bands around Butte, and especially loved to play music with their dear friends Shirley and Cecil Karber. Earl loved fishing, camping and exploring the outdoors. Many a day was spent taking road trips to all corners of Montana. During his last years he truly loved being with his family. Earl “the Pearl” had great wisdom after living such a long life and passed on many wise thoughts. He is preceded in death by his loving wife Lois, sons Robert and Thomas Reynolds, his parents Marie & William, sisters & spouses – Merle (George) Archer, Genevieve (Don) Swan, Helen (Bee) Nevin, Betty (Ray) Crook; and his brothers & spouse – Russell & Carol Reynolds, and Donald Reynolds. He is survived by his children John (Helen) Reynolds, Barbara (Tom) Coyle, Michael Reynolds, and stepdaughter Pat (Len) Jacobsen. His sister-in-law Carol Reynolds; grandchildren Stephanie (Andy) Schell, Heather (Will) Best, Chelsie (Jerimee) Cortez, Emily (Randy) Thompson, Caleb Coyle and Katie Coyle. As well as six great grandchildren (Ellie, Madison, Jaxson, Mia, Wyatt & Sawyer), along with numerous nieces and nephews. Cremation has taken place. Memorial services will be conducted Friday afternoon at 2 o’clock in Wayrynen-Richards Funeral Home and entombment will be in Mountain View Cemetery. A reception will follow in Wayrynen-Richards Community Center.

The family of Herbert Earl Reynolds created this Life Tributes page to make it easy to share your memories.

Send flowers to the Reynolds family.