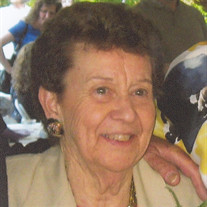 Iona Joan Fink McDougall, age 89, went home to her Lord Jesus on Easter Morning, April 1st, 2018 with her family around her. Iona was born on Feb 20,1929 in Minneapolis, Minn. to Clara Teresa Klimek Fink and Andrew Roy Fink. She was the 2nd oldest of 10 children. After leaving Minneapolis, the family lived in Billings, Hysham and Lewistown before moving to Missoula about 1937. Iona attended St. Anthony's Grade School and graduated from Missoula's Sacred Heart Girls Academy in 1947. She met the love of her life, Carroll R "Mac" McDougall in 1946 after he returned from serving in the Navy in WWII. She and Mac were married in St Anthony Church on July 24, 1947. They lived in Avery, Idaho for a time, later moving back to Missoula and Anaconda. They finally settled in Butte in 1950 where they built the home that they raised their 9 children in and where Iona still lived. Iona was involved in church and scouts and every kind of mother's group imaginable. Mac and Iona loved to travel in their motor home and visit family wherever they went. They often travelled many weekends to square dance events. Iona loved to sew clothes for her kids and do many crafts. Many Butte folks remember her as the coffee cart lady at the Montana Power Building. She was preceded in death by her husband Carroll "Mac", her parents, sisters Marjorie Ann Fink and Marlene Fink Cella, brothers Millard, Duane and Gerald Fink. She is survived by her sister, "Lois" Sister Clarella Fink of Seattle, brothers Hylton Fink of Woodinville Wash, Donald Fink of Graybull Wy, and Denis Fink of Santa Ana Calif, children: Rich McDougall (Kathi Carr) of Lolo, Mike McDougall (Linda McDougall) of Lolo, Charlene McDougall Rivera (Bob Rivera) of Butte, Dave McDougall (Sharon Scott) of Spokane, Kathy McDougall Hrella (Bill Hrella) of East Helena, John McDougall (Carol Nash Cook) of Jefferson City, Tom McDougall of Big Fork, Jerry McDougall of Butte and Barb McDougall Collins of Butte. She and Mac have 31 Grandchildren and 24 Gt-Grandchildren. She leaves behind "hundreds" of other "family" and friends who will miss her. Too many to name, but you know who you are. The Family would like to Thank all her doctors and caregivers and especially Highlands Hospice who helped with her care. Memorials may be made in her name to Journey Assembly of God, or to the Multiple Sclerosis Association or to Highlands Hospice of Butte. Iona and Mac were active members of Journey Assembly of God Church in Butte. Iona will be laid to rest next to her husband "Mac" at the Western Montana Veteran's Cemetery in Missoula.

Iona Joan Fink McDougall, age 89, went home to her Lord Jesus on Easter Morning, April 1st, 2018 with her family around her. Iona was born on Feb 20,1929 in Minneapolis, Minn. to Clara Teresa Klimek Fink and Andrew Roy Fink. She was the 2nd... View Obituary & Service Information

The family of Iona Joan McDougall created this Life Tributes page to make it easy to share your memories.

Send flowers to the McDougall family.