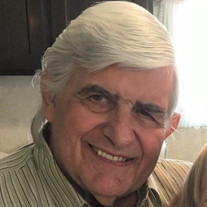 Jack L. Ritter Jr. passed away peacefully Monday, January 3, 2022 in his home. He was born in Butte, MT April 29, 1943 to Jack O. and Mabel M. (Bugni) Ritter. He grew up in Meaderville and attended the Franklin School. He graduated from Butte High School in 1961. He joined the Boilermakers Local 130 in 1962 and worked for the Anaconda Company until its closure in 1982. He then joined Boilermakers Local 11 working locally and coast to coast until retiring in October of 2003. His work ethic was unprecedented. He was a proud union member of 60 years. Jack married Mary Jane (Janie) Evatz in St. Ann Church on January 20, 1968 and shortly after they began building their new home where they raised their children. Jack lived passionately in all things but above all his family was the most important. He loved Chevys and drag racing, especially his ‘65 SS which he bought new. He enjoyed spending time in the outdoors snowmobiling, hunting, camping, RZR riding and anything that would get him and his family together. Jack always whole heartedly supported his children and grandchildren in all their activities and delighted in their accomplishments. Jack lived with a conviction of unrestrained passion for life. With Jack it was all or nothing. He is loved and will be deeply missed by all who were fortunate to have known him. Jack is survived by his wife Janie and their four children: Mark and Gina Ritter of Butte, Mike and Kim Ritter of Laurel, Steve and Brook Ritter of Coeur d’Alene, ID, and Melissa and Mike Swanson of Butte. His grandchildren are: David, Ashley, Kevin, and Ryan Ritter. Nacyshla Mehring (David Schelin), John and Mallory Hamry, Mike and Austin Ritter. Kaleb and Kobe Ritter. Madisyn, Mason, and Myla Swanson. Also great-grandchildren: Braelynn, Brixley and Rynleigh Schelin, his sister and brother-in-law, Michelle “Mickie” and Jerry Kriskovich, brother and sister-in-law, Gary and Cynda Ritter, sisters-in-laws, Cookie O’Connell and Ann Lynn Cavanaugh as well as numerous nieces, nephews and cousins. Jack was preceded in death by his parents Jack O. and Mabel Ritter, his parents-in-law Mary and Ciril Evatz, and Sister-in-law Esther Sagar. Funeral mass for Jack will be celebrated Monday, January 10th at 12 noon in St. Ann Catholic Church. Friends may call at church beginning at 11 o’clock. Interment will be in Holy Cross Cemetery.

Jack L. Ritter Jr. passed away peacefully Monday, January 3, 2022 in his home. He was born in Butte, MT April 29, 1943 to Jack O. and Mabel M. (Bugni) Ritter. He grew up in Meaderville and attended the Franklin School. He graduated from Butte... View Obituary & Service Information

The family of Jack L. Ritter Jr. created this Life Tributes page to make it easy to share your memories.

Send flowers to the Ritter family.