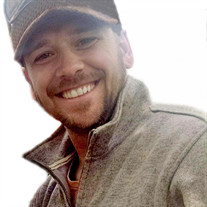 Born October 24, 1982 in his home town of Butte to Dottie Bennett-Kukay and Michael Kukay. On this day, Jacob Lee Kukay began his story. And while some great stories, the ones that have many chapters and the pages seem to fly by, Jake’s was the kind that you never want to have end. So as a new one begins, know this dear family and friends, Stephany and Hannah’s Jake, our Jake, everyone’s Jake won his war, never bowing to cancer but rather coming out on top entering heaven with his booming and ever present laughter and grin. Jake did so on Friday, August 7th at 1:49 a.m. at St. Peter’s Hospital with great dignity, courage and peace; wearing rosary beads, and gripping a tattered-carved wooden cross in one hand, resting gently with his beautiful bride and soul mate Stephany in his arms. His all too short but definitely fulfilled life on earth touched so many. When Jake wed his beautiful bride (and anchor) Stephany (Engel) Kukay, in so doing became an amazing father to his beautiful daughter Hannah-Banana DeShazo as Jake referred to her lovingly, always. Simply put, “He loves them, he always has.” Jake was an amazing son to Dottie (Bennett) Kukay and to Mike Kukay, along with Stephany’s parents Peggy Holland and Joe Engel. Deep love came easy and was felt always amongst the three brothers. Jake was the best of brothers to Brian & Donna Kukay and Travis & Jacqueline Kukay, as well as an unbelievable uncle to Kyler, Ally, Myleigh and Easton. Jake was a true friend, loved by family, immediate, and extended, and to so many others. In addition to those mentioned above, Jake’s memories are carrying on through Grandmother Elise Bennett, along with aunts, uncles, cousins, and friends new and old, from all sides and walks. Jake is now meeting up with his cousin Cody, his uncles, Jim, John, and Bob, and his grandparents Frank, Dorothy, Ed and Pat. Jake received his Bachelor of Science (Occupational Safety and Health) and Master of Science (Industrial Hygiene) degrees at Montana Tech. This led him to his professional career where he was able to use not only his knowledge and skill that he gained in school but also inject his heart, soul and personality into creating a safe and clean environment for those lucky enough to have him watching over their shoulders. The love, dedication and energy that he gave to his profession did not stay in the office, or at the work sites he visited as these weren’t what defined him. Rather, he continued to give even more of his heart and all of his soul to Stephany and Hannah and their three dogs Tink, Rocky and Kimber and all of his immediate and extended family and countless friends. Jake loved everyone the same, to visit with him was to know it. As it was always about Jake’s connections with people, in the moments, all shared with his family and with his friends. This gift easily rivaled any of those found in movies like the “Sandlot”, “Goonies”, and “Stand By Me”. The only difference being that all of Jake’s were real, authentic, the kind that you can’t make up. Jake experienced everything with such intensity. It was simply in every fiber of his being. Jake’s love, loves, passions, and friendships were as real and as authentic as they come. Jake, said once, that Stephany had told him something that changed his life forever...well Jake, just being with or knowing you has changed all of our lives forever. Jake, “Kuke” as he was known by many, attended Kennedy Elementary, West Elementary, East Junior High, and Butte High graduating in 2001. Jake made countless friends and brought happiness to each and every one he met. Jake had so many adventures that he took on his way. His story --as it unfolded before with friends and family-- captured beautiful times as the kayaker, the fisherman, the ball player and the multi-sport letterman in track, soccer, and wrestling. Jake studied tae-kwon-do, loved sky diving, and even “sport and trad” rock climbing. While a few may even recall Jake the biker, all will remember Jake both as a joker and as a consummate friend. His thrill for life didn’t pour out in drops but came in floods! We are excited to hear from each of his friends and family as there are so many more stories to be told. Our thoughts are with you now and forever Jake, “...no retreat...no surrender!” With the word’s that Jake always used and even some of the last he spoke, “Love ya!, Have Fun!” During his final days, Jakes hospital rooms did not suppress but instead continued to brim with his beauty inside and out as witnessed by two special Doctors, Dr. Thomas and Dr. Ong. Once back in Montana, love was overflowing with people spilling into the halls and even around the corner. Not once or twice, but several times over several days. All were humbled by Jake’s smile, his laugh, and his sense of humor, even then. Please help us continue to remember and celebrate Jake’s life. A service will be held at Immaculate Conception Parish located on the corner of Western St. and Caledonia St. in Butte Montana at 1:00 p.m Saturday, August 15th . This will be followed by a picnic at Basin Creek Reservoir. So please bring your cooler, your chairs, and most importantly your stories. All that knew and loved Jake are sad for sure, but he wouldn’t want us to be this way for long. So please help us honor Jake by dressing according to Jake’s personality and charm; warm, colorful and fun! Donations can be made to a college fund for Hannah please contact the Wells-Fargo office in Butte at either location at the Main Street address or

Born October 24, 1982 in his home town of Butte to Dottie Bennett-Kukay and Michael Kukay. On this day, Jacob Lee Kukay began his story. And while some great stories, the ones that have many chapters and the pages seem to fly by, Jake&#8217;s... View Obituary & Service Information

The family of Jacob Lee "Jake" Kukay created this Life Tributes page to make it easy to share your memories.

Send flowers to the Kukay family.