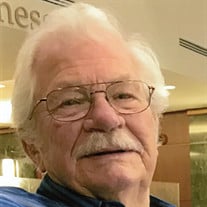 James Edwin “Jim” Martin, 78, passed away Tuesday, February 27, 2018 in St. Patrick’s Hospital in Missoula, surrounded by his loved ones. Jim was born June 5, 1939 to Forrest and Vella Martin in Rupert, West Virginia. He was raised on a farm in Big Laurel Richwood, West Virginia by Lieurena “Lou” Booth, his foster mother. Jim moved to Butte in 1964 and worked for the Anaconda Company for many years until he started his own auto repair shop. He had a passion for building and racing stock cars, traveling, hunting and fishing, but most of all he loved being with his family. He was a very kind-hearted person who helped out many others. He was preceded in death by his parents, Forrest and Vella Martin, his foster-mother, Lieurena Booth, brothers, Don and Gerald Martin and his sister, Lorraine Amos. He is survived by his wife, Peggy Martin, his daughters, Donna Martin and Gary Whipple, Charity and Steve Turk, Georgette and Zolton Kakash, his brother, Ron Martin, grandchildren: Cole, Kiona, Jurzee and Stevie Turk, Aislyn and Alex Kakash, JamiJo Martin, great-grandchild, Devon Martin and numerous nieces and nephews.

The family of James Edwin "Jim" Martin created this Life Tributes page to make it easy to share your memories.

Send flowers to the Martin family.