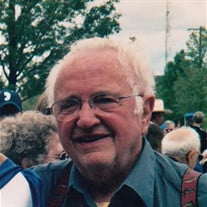 Mr. James J. Matteucci passed away Sunday, March 25, 2018 at the Springs Assisted Living. He was born in Meaderville on Christmas Eve, 1931 to Frank and Lillian (Stefani) Matteucci. He attended Butte schools including the Franklin, Holy Savior, Butte Central and graduated from Butte High School. He and Geraldine “Geri” Demmons were married July 19, 1953 in St. Helena’s Church in Meaderville. Jim had a love for anything mechanical and at one time even raced stock cars. He operated an OK Tire store in Anaconda and was an equipment serviceman at Don’s Office Equipment for many years. He also worked for Milo Casagrande, a good friend, driving wreckers. Jim loved his Italian heritage and enjoyed making wine and grappa. He was a volunteer with the Meaderville and McQueen Fire Departments, was a member of the Cristoforo Colombo Lodge and an active volunteer for Our Lady of the Rockies. He and Geri loved gardening and loved to dance. Jim was one of those people who couldn’t sit still. Even when he was at the cabin in Divide or at hunting camp in the Ruby Valley, He was always looking for a job to do. He found out later in life the he enjoyed cooking and was really good at it! He enjoyed attending all his class reunions and was an essential part of the Butte Italian History exhibit at the Butte Archives. Jim is preceded in death by his parents, his brothers Clarence “Pee Wee”, Danny and Harold Matteucci and nephew, Luke Matteucci. Survivors include his wife Geri of Butte, daughters and sons-in-law, Karen and Fletcher Mulvaney of Helena, Kathy and Frank Taras of Butte and Kris Matteucci of Butte. Also surviving are his foster-daughter, Lana and Gary Mullaney of Helena, grandchildren: Nick and Brianne Mulvaney, Andy Mulvaney and Whitney Treadway, Joe Taras, Matt Taras and Carly Portra, Melissa Taras and Bronson Pate, Rachel Richardson and Jeff Keller, Angie Richardson, Jody Troupe, Jamey Mullaney, Josh and Trista Mullaney, fourteen great-grandchildren, one great-great-grandchild and numerous nieces and nephews. Special thanks go out to Jim and Geri’s neighbors Leeanna Spath and Tom Stears who were so much help over the years and to the Highlands Hospice crew and the staff at the Springs for all the kind and gentle care given to Jim in in final days. Memorials may be made to the Highlands Hospice or Our Lady of the Rockies.

Mr. James J. Matteucci passed away Sunday, March 25, 2018 at the Springs Assisted Living. He was born in Meaderville on Christmas Eve, 1931 to Frank and Lillian (Stefani) Matteucci. He attended Butte schools including the Franklin, Holy Savior,... View Obituary & Service Information

The family of James Joseph Matteucci created this Life Tributes page to make it easy to share your memories.

Send flowers to the Matteucci family.