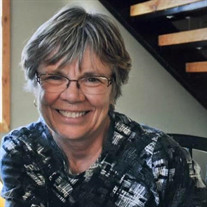 Janice Horton Plessas, 71, originally of Ida Grove, Iowa, passed away on July 20 in Butte, where she lived since 1971. Her gentle soul will be missed as Heaven gains another angel. Janice's birth was front page news in the little town of Ida Grove, Iowa's Courier Newspaper. She was born January 4, 1946 to Verle and Genevieve Horton. Her parents moved to St Paul, Minnesota when her father took a job as an accountant there. Her mother had been a teacher in Iowa and became a career teacher in Minneapolis. Jan did very well in school. She won a American Exchange scholarship that led her to spend the summer before her senior year of high school living with a family in Brazil. Throughout her life she loved learning about the world. Janice received her elementary education at Hancock Elementary in St Paul, Minnesota, which she was pleased to find was designed just like the McKinley School in Butte where she taught for 16 years. She graduated from Mounds View High School and the University of Minnesota. She taught in Foster City, California for three years before coming to Butte, Montana. Her love of teaching came in part from her sincere interest in each individual child. She honestly enjoyed learning herself and modeled that. Her favorite age to teach was 5th grade, recognizing the expanding worlds of each child. She knew how much children enjoy simply listening to their teacher read so she read aloud at least one book new to herself each year. When she’d ask the class what they thought might happen next, they liked that she didn’t know the outcome either and it made it an adventure the class shared. She felt being a good teacher was her own way of parenting but she delighted in being aunt and godmother to her niece Anne. She was the best aunt any child could wish for. She closed the distance between Butte and St. Paul. When long-distance calls were still something of an adult-only pleasure, she’d call Annie for mega-one- to-one time, each relating their days’ or weeks’ adventures. When Annie’s mom tried to help the conversation from the background, Annie covered the speaker and archly told her, “I’m talking to Aunt Jan.” Lesson learned. Jan taught Anne that her aunt was always present for her, always on her side. Janice lived a compassionate, optimistic and loving life and was kind and empathetic to everyone. She had an everlasting smile and a bright outlook. These qualities contributed to her success as an exemplary teacher for her students at McKinley, West Elementary, Margaret Leary, and Whittier. She enjoyed planning exciting and interesting lessons and she loved her students, her job, and her fellow teachers. And she was loved by them. She eventually discovered her true calling and favorite profession: Grandmother of eight darling grandchildren. Janice met her perfect partner, Don Plessas in November of 1991. The soul mates were married Feb 23, 1996. They worked together on their Real Estate business for eight years after retiring from teaching. They both enjoyed exploring various places and took trips to Germany, Greece, Italy, Cancun, Saint Martens, Hawaii and many of the states in America. They also enjoyed the past eight winters as snowbirds in Arizona and California. She was an excellent swimmer and enjoyed bicycling and walking. Her high school friends were friends for life. Despite their scattering across states, they found ways to be together, to share both the fun and the troubles of adult life. They loved and supported one another. Janice was a beloved wife, stepmother, sister, aunt and grandmother. She will be forever missed and her memories will be treasured. Janice is preceded in death by her parents, Verle and Genevieve Horton and her husband’s parents, Don and Katie Plessas and her special grand-dog, Paris. Janice is survived by her husband, Don Plessas Jr., daughter and son-in-law Kimberly and James Vo, daughter Kirby Plessas, daughter and son-in-law Kristin and Matthew McLeod, son and daughter-in-law Darrell and Maelyn Plessas, son and daughter-in-law Dale and Jackie Plessas, son David Plessas, son and daughter-in-law Demitri and Ashley Plessas, sister and brother-in-law Beverly and Bruce Johnsen, grandchildren Kaitlyn Plessas, Kennedy Plessas, Emily Plessas, Kaden McLeod, Alexis McLeod, Bailey McLeod, Riley Vo, Dante Plessas and soon-to-be baby Plessas, niece and nephew-in-law Anne Kaintz and Michael Peterson. In lieu of flowers, memorial donations may be given to the Butte Food Bank, Montana Public Radio or Montana Public Television. The Plessas family wishes to extend a special thanks to PA Keri Ferguson and all of the doctors and nurses who have been so helpful and caring.

Janice Horton Plessas, 71, originally of Ida Grove, Iowa, passed away on July 20 in Butte, where she lived since 1971. Her gentle soul will be missed as Heaven gains another angel. Janice's birth was front page news in the little town of Ida... View Obituary & Service Information

The family of Janice Carol Plessas created this Life Tributes page to make it easy to share your memories.

Send flowers to the Plessas family.