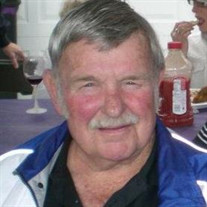 “What a Wonderful World” by Louis Armstrong played as John “Jack” Ayers took his last breath on Wednesday, September 14, 2016. The lyrics to this beautiful song were fitting as they mirrored Jack’s passion for Life. Jack was born in Butte, Monday, April 6, 1942 to John and Tessie Ayers. He attended Butte schools. Jack worked for the FBI for a short time before he drew his energy earning the title of Butte’s “Friendliest Milkman.” Jack spent 32 years of his life working for Meadow Gold Dairy and serving the community of Butte. After working 92,160 HOURS with a mixture of frigid temperatures, lifting heavy crates, loading his truck, washing his truck, waking up at 4 a.m., meeting countless friends, putting smiles on people’s faces, never missing a beat or a day of work, Jack retired from the dairy and his membership from the Butte Teamster’s Local #2. Not one to sit idle, Jack went on to work for another 13 years as a cashier at the Town Pump in Rocker. He LOVED his job there and he made many friends. He was self-made and self-reliant giving true meaning to the song “Hard Working Man.” Jack was also a fabulous Carpenter embracing skills with every kind of tool that could fashion wood. He enjoyed his beautiful home and would spend lots of time manicuring his lawn, tree’s and flowerbeds. Jack married Carol Galetti in 1963 and together they had two daughters, Tina and Jeanette. He then married Marty Sayler and Jack adopted her son Josh. He created many memories with Marty and it was with her that he enjoyed dancing and camping. For the past 25 years, Jack has been with his companion Dorothy Biers. Together, they created a life and have shared countless memories. Dorothy never left Jack’s side and he was very fortunate to have her. Jack is survived by his other half, Dorothy Biers, his daughter and son-in-law, Jeanette and Jack Kappes of Butte, son and daughter-in-law, Josh and Anne Ayers of Lake Havasu City, Arizona, son-in-law, Michael Boman of Helena, grandchildren: Jackson and Jonathan Kappes, Kaylyn Sampleton, Kelley Risser, Whitney Wyckoff, Austin Stewart, Tanis and Taylor Ayers. Also surviving are his great-grandchildren: Blake and Hunter Risser and Aydin Wyckoff. Sister and brother-in-law, Joan Marie and Joe Davis. Nieces and nephews, Penny Davis, Fred and Mike Davis. Besides his parents, John and Tessie, Jack is preceded in death by his daughter, Tina Sampleton -Boman and a grandson, Jordan Sampleton and son-in-law, Paul Rivers. Last but NOT least, Jack is survived by his BEST FRIEND yellow lab- COLT. “The true object of all human life is play. Earth is a task garden; heaven is a playground.” It is now dad that you can run and play hard with no more pain. xoxoxo forever and always. The family would like to express our sincere appreciation to the Town Pump for providing much of the food for his Service.

The family of John Joseph Ayers created this Life Tributes page to make it easy to share your memories.

“What a Wonderful World” by Louis Armstrong played as John “Jack”...

Send flowers to the Ayers family.