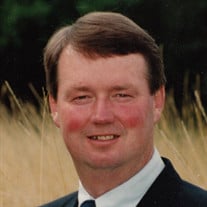 Coach John Cheek finally met an opponent he couldn&#8217;t beat. After an 8 year battle with prostate/bone cancer John transitioned from his temporary earthly home to his eternal heavenly home on Wednesday, July 19 at his home in Butte surrounded... View Obituary & Service Information

The family of Coach John Blodgett Cheek created this Life Tributes page to make it easy to share your memories.

Send flowers to the Cheek family.