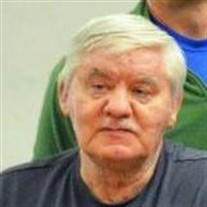 John Dorn Cunneen, 75, born and raised in Butte and longtime resident of Great Falls passed away on April 26th. He suffered a stroke in 2013 but battled with incredible courage to regain his health. He was grateful to his family, friends and medical care givers who assisted in his recovery. John was born on January 13, 1944 to John and Ella Mae Cunneen. He was the third of 11 children. John grew to the height of 6’4” and was affectionately called “Big John” by his seven sisters and three brothers. He attended Saint Anne’s Grade School and Boy’s Central High School. John’s fondest memories were with family, friends and teammates. John was an extraordinary athlete in every sport, but his greatest accomplishments were on the grid iron. John pitched the South Side AC to the 1956 Little League city championship. John helped lead Butte into the American Legion State Championship in 1962, but they lost 1 – 0 to Billings whose pitcher was eventual MLB hall of famer Dave McNally. During his four years as a Maroon, John became part of Butte’s notorious “Football Wars” with crosstown rival Bulldogs. John was selected All State First Team running-back and was recruited by numerous colleges. Upon HS Graduation John signed to with the MSU Bobcats. Somehow John wound up playing a redshirt year with the U of M Grizzly’s as a linebacker! MSU Head Coach Jim Sweeney convinced John to return to the Bobcats and play fullback. The Cats dominated the Big Sky Conference winning the Titles in 1964 and 1966, narrowly losing the National Championship in the Camellia Bowls. After graduating from MSU, John married the beautiful Karlyn Bue from Reed Point. They were blessed with two wonderful daughters, Brenda and Amy. Unfortunately, their marriage ended in divorce, resulting in lifetime of regret for John. John settled in Great Falls. He taught and coached football at CM Russell. He later worked as a paint contractor and owned several rental properties. He served in both the U.S. Army and Air Force Reserves nearly 30 years. John was proceeded in death by his father. He is survived by his daughters, Brenda Miller, Billings and Amy Williams, Great Falls; by his mother, Ella Mae Cunneen, Butte; his sisters: Rosalie Watt, Helena; Connie and Joe Pierce, Butte; Carol and Bob Nelson, Butte; Elaine and Bob Hill, Billings; Debbie and Andy Kutchtyn, Butte; Nancy and Mark Lienemann, Wenatchee, WA; Rita and Don Clark, Missoula; and his brothers: Mick and Jenny Cunneen, Billings; Bill and Shelly Cunneen, Butte; Paddy and Christine Cunneen, Butte. Also surviving John are three grandchildren, and numerous nieces, nephews and cousins. Wayrynen-Richards Funeral Home, Butte is in charge. Vigil is Tuesday at 7pm. Funeral Service is Wednesday at 10am at St. Anne’s with Internment at Mountain View Cemetery. A reception will follow at the Thornton Building, 65 East Broadway. All Friends and Family are welcome!

John Dorn Cunneen, 75, born and raised in Butte and longtime resident of Great Falls passed away on April 26th. He suffered a stroke in 2013 but battled with incredible courage to regain his health. He was grateful to his family, friends and... View Obituary & Service Information

The family of John Dorn Cunneen created this Life Tributes page to make it easy to share your memories.

John Dorn Cunneen, 75, born and raised in Butte and longtime...

Send flowers to the Cunneen family.