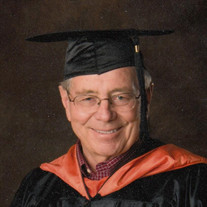 Mr. John G “Jocko” Evans passed away Wednesday evening, November 6, 2019 at the Springs Assisted Living. He was born in Butte Tuesday, October 14, 1941 to John G. and Betty L. (Bauman) Evans. He attended Paxson School in Missoula, the Monroe and Webster-Garfield in Butte, graduated from Butte High School in 1959. He attended the San Mateo Junior College then returned to Butte where he earned his Bachelor’s Degree in Petroleum Engineering from Montana School of Mines in 1965. He earned his Master’s Degree in Petroleum Engineering from the Pennsylvania State Institute in 1967. He and Gaye Fabian were married April 17, 1965 in St. Mark Lutheran Church and his career in petroleum took them all over the world, making their home in England, Norway and Indonesia before returning to Butte in 1991. John served as professor at Montana Tech and head of the Petroleum Department at Montana Tech until his retirement in 2007. John and Gaye also owned and operated Oilfield Consultants Inc. and Mountain View Cemetery in Butte. John received numerous accolades and commendations throughout his career including the Chancellor’s Medallion at Montana Tech, the Distinguished Alumni Award and being named by Governor Bullock to the Montana Board of Oil and Gas. In September, the “Jock Evans Journeys Room” was dedicated in the Student Success Center at Montana Tech. Jocko was a member of the Society of Petroleum Engineers, a Registered Professional Petroleum Engineer with the state of Montana, served on the Montana Petroleum Association Board of Directors, the Digger Athletic Association Board of Directors, was a Butte High Golden “B” and was a life-long and active member of St. Mark Lutheran Church. When not working, or in any number of ways being of service to others, John enjoyed playing golf and was an avid reader. He is survived by his wife, Gaye Evans of Butte, son and daughter-in-law, John G. and Michele Evans of South Jordan, Utah, daughter and son-in-law, Tracy Evans and Link Dyrdahl of Seattle, grandchildren Rebecca and Ryan Roberts, Britany Evans, Jack and Sacha Dyrdahl, great-grandchildren, Roman and Ryker Roberts, sisters and brothers-in-law, Marcia and Norm Houseworth of Fremont, California, Caryl and Dave Fantazia of Oakdale, California and Terri and Mike Carver of Federal Way, Washington. Memorials in Jocko’s memory may be made to the Jocko and Gaye Evans Endowed Scholarship Fund at Montana Tech or to St. Mark Lutheran Church.

The family of John G "Jocko" Evans created this Life Tributes page to make it easy to share your memories.

Send flowers to the Evans family.