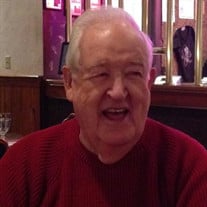 John Patrick Powers passed away on Tuesday, September 17, 2019 in his beloved Powers family home in Centerville. Born on November 4, 1930, John never wanted to live anywhere else but on the hill. Born and living on LaPlatte St for nearly 89 years, John was the youngest son of 9 children born to Richard and Catherine (Murphy) Powers. John Pat, as he was known to neighbors, friends and family, attended St. Lawrence School and graduated in 1948 from Boys Central High School. He worked a short time on the Mountain Con before being drafted into the army in 1954 serving in Ingrandse, France. He met and served with Tom Lalor, Charlie Krasinski and Norm Pressiel who became lifelong friends. Returning to Butte he went to work for PPG Industries, Inc. where he loved connecting with customers to help them add color and wallpaper to countless homes and businesses in the state of Montana. Being part of a large family, John took an active role planning trips, picnics, and holiday gatherings. He remembered every one of his nieces and nephews’ birthdays as well as everyone he met parents and grandparents. Especially if they were from the hill. He was the family historian, story teller and an encyclopedia of memories for places, people, and events. John married the love of his life, Joan Sullivan, on Oct. 14, 1972. They celebrated 40 wonderful years of marriage and together they raised two children. John and Joan spent many happy years at Georgetown Lake Boat Club and in later years enjoyed wintering in Mesquite, NV. John is proceeded in death by his beloved wife Joan, his parents Richard and Cate, and all his siblings and their spouses; Mary Kelly (Francis “Redneck”), Joseph “Rivers” Powers (Carrie), Helen Sheehan (George), Alice Mangles (Fred), Loretta Voyzey (Jim), Richard Francis “Fran” Powers (Dorothy), Jeremiah Edward “Edge” Powers (Vilma) and Joan Theresa Shea (Bart). John Pat is survived by son Sean, daughter Janel, foster grandson Lucas (Hilary) Griswold and children, as well as many nieces and nephews. In particular, his other “kids”, Greg Powers, Jerry Powers, Danny Powers and Patsy Coates who took great care of their Uncle John. The family would like to thank Nikki Foley for her dedication and work with dad. We would also like to thank the Compassus hospice team. 86 years at One East. Keep your Irish eyes smiling and your Irish heart happy as you reunite with your Joano. We love and will miss you dearly dad and Uncle John.

John Patrick Powers passed away on Tuesday, September 17, 2019 in his beloved Powers family home in Centerville. Born on November 4, 1930, John never wanted to live anywhere else but on the hill. Born and living on LaPlatte St for nearly 89... View Obituary & Service Information

The family of John Patrick Powers created this Life Tributes page to make it easy to share your memories.

Send flowers to the Powers family.