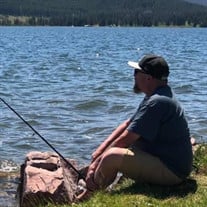 John Mark Salcido passed away at his home on December 11, 2020. John was born on December 21, 1966 at St. James Hospital in Butte, Montana to John and Arlene Salcido. John and Arlene relocated to Utah with their family in 1984 where he met Audria Sutherland. John married Audria on December 10, 1987 in Ogden, Utah. They had two children, Auriel and Jazmin. His girls were his world, and he considered being their father his greatest gift in life. John enjoyed hiking, fishing, camping, playing music, and spending time with his granddaughter, Colette whenever possible. He recently returned to Butte and felt an attachment to his hometown. He was so happy to get reacquainted with his many cousins, aunts, and uncles in the area. John was kind, compassionate, and well loved by all who knew him. John spent many years in retail management and later was employed by the USPS as a mail carrier. However, from a young age John felt a call to pastoral ministry. His call was fulfilled when he started a church in Ogden, Utah in 2001. John pastored in Ogden Utah for 15 years. During his ministry years, John was ordained by the Pentecostal Church of God, traveled to Ghana, West Africa for missions and raised many young leaders. His ministry greatly affected the lives of many as he shared His love for God with the community. John’s impact as a pastor is still felt by many in the Ogden area. At the time of John’s death, he was still employed by the USPS, a job that he loved. John was attending Old Fashioned Baptist church at the time of his death and enjoyed the ministry of Pastor Derek Loewen. John is survived by his daughters Jazmin and Auriel, and grandchildren Colette, Boaz, and Ruth, his sister Rachel, brother Bob and both of his parents John and Arlene Salcido. John leaves behind a niece, Sophia and two nephews, Jesse and Gabe, his fiancé Kim, and numerous friends and relatives in the Butte area.

John Mark Salcido passed away at his home on December 11, 2020. John was born on December 21, 1966 at St. James Hospital in Butte, Montana to John and Arlene Salcido. John and Arlene relocated to Utah with their family in 1984 where he met... View Obituary & Service Information

The family of John Mark Salcido created this Life Tributes page to make it easy to share your memories.

Send flowers to the Salcido family.