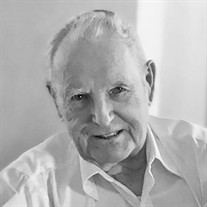 Joe Jordan passed away January 14th at his home surrounded by his loving family. Joe was born on November 14, 1935 in Butte, Montana to Ruth (Sullivan) and August (Gus) Jordan. Raised in uptown Butte, he attended McKinley grade school and graduated from Butte Public High School in 1953. He then attended the Montana School of mines and eventually started working at F & S Construction as they began work on what was to become the Berkeley Pit. He worked his way up from an oiler to a foreman then helped to start General Constructors eventually becoming General Manager. During this time he was also involved with Greyrock Trucking in Anaconda. After leaving General Constructors he and Rosemary started Jordan Contracting, Inc. based in Anaconda, MT and continued there until his passing. He took great pride in the company he created and the work they accomplished. Early on, Joe saw the need for a company to help perform reclamation of the scarring left by mining in the Butte and Anaconda area and developed long lasting relationships with the agencies and companies involved in the cleanup helping them meet their cleanup goals while providing work and income for countless employees and businesses in the area. Some of his favorite projects were the Old Works Golf Course, the Granite Mountain Foreman’s Park, “Rails-to-Trails” walking trails in Butte, Opportunity Ponds Reclamation, Silver Bow Creek Streamside reclamation, Smelter Hill, Washoe Park and the Warm Springs Ponds. All of his relationships, both business and personal, were successful due to Joe’s impeccable integrity which was at the core of his being. He always gave 110% whether it involved work, sports or family. His work ethic was surpassed by none and he played just as hard; enjoying water and snow skiing, snow machining, flying, handball, racquetball, pheasant hunting, golf and was a standout on his college football team as well as a member for many years of the Butte Elks Lodge, #240. He also loved playing cards whether with family and friends or with his poker buddies and was always up for a game of Acey-Deucy. He enjoyed time with family and especially when they were all together at yearly Christmas Parties and at his cabin on Flathead Lake. “The Lake” was one of the few places he would ever “unwind” but even then the relaxation usually involved a “project” of some sort or another. Friends, kids and grandkids all have stories of “relaxing” with Joe and ending up exhausted but with a feeling of accomplishment. He was truly happy when he was busy and best friends Phil and Doc were always willing accomplices on many of his projects. He married Jeanne (Dooris) on September 17, 1955, had three children then later divorced. In October 1982, he married Rosemary and also gained a daughter and son at the same time. Joe was a very private man with a huge heart and supported many local charitable organizations and projects for the betterment of his communities including the lighting of the Anselmo Headframe, the Copper Chute slide in Anaconda, Jeremey Bullock Soccer fields, and many others. He also gave from his heart to many people that we will probably never know about given his humility. Joe was preceded in death by his sister Dorothy Lou Jordan, father Gus Jordan and mother Ruth Jordan and stepson Kevin Strickland. Survivors include wife Rosemary Jordan, sister Shirlee Tibbetts, children Judy Vukasin, Jill (Steve) Trestik, Jerry (Denise) Jordan, Kim (Lynn) Proctor, grandchildren Tristan Vukasin, Bryden (Becky) Vukasin, Graysen (Kristin) Vukasin, Courtlan Vukasin, Skylar Vukasin, Makenna Vukasin, Mandie (Jephren) Perez, Sammie Trestik, Ian (Shaina) Jordan, Rachael Jordan and Andrew Jordan, Ashley (Kevin) Tripp, Zachary McCarthy, eight great-grandchildren and numerous nieces and nephews. Due to the Covid pandemic private family services will be conducted. A public memorial service will be conducted at a later date and will be announced. Express condolences at www.wayrynen-richards.com. In lieu of flowers, donations can be made to Shriners, World Museum of Mining or the charity of your choice. We can’t wait to see you again when you will greet us with “What can I get you to drink?”

The family of Joseph D. "Joe" Jordan created this Life Tributes page to make it easy to share your memories.

Joe Jordan passed away January 14th at his home surrounded by...

Send flowers to the Jordan family.