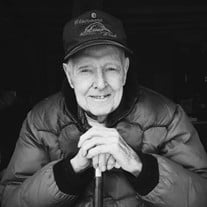 Joseph E. Powers, 89, died August 18th surrounded by his loving children and a special angel. He was born on September 2, 1925 to Alice and George Powers. He grew up alongside three sisters, Betty, Alice, and Mary Kay and took pride in maintaining a special relationship with each. Dad attended schools in Butte and after graduating from Boys Central High School, attended Carroll College for one half year before heading to the recruiting office where he enlisted in the Navy during WWII. He was stationed stateside on the USS Prometheus. Three years later he was honorably discharged, and after a brief stay at the University of Michigan returned to Carroll College where he earned his degree in biology. He was offered a position as a bacteriologist with the state, but saw an ad in the paper looking for teachers in Butte that offered $50 a month more. His career path was chosen at that time. He then attended Western MT College where he earned his teaching credentials. Dad taught for seven years at the Sherman school while earning his masters degree from Western. That accomplishment led to his receiving a four year grant for summer study in biology through the University of Montana. Dad taught biology at East Jr. High School for eleven years before serving as the principal for 13 years. Upon retirement, Dad was able to spend more time in his cherished mountains hiking, hunting, and fishing with his children. He also had a weekly outdoor adventure with "the over the hill gang" Brucey, Kohn and Klink. After he could no longer hike at 80 years old, he'd meet the gang every Tuesday morning for B&B (breakfast and bull...)! Dad's thirst for knowledge was an ongoing endeavor learning new skills, such as woodcarving, photography, calligraphy, welding, and computing. He referred to his computer as "the wonder machine" because he always, "wondered what it would do next"! He also took great pride in his yard work. Always the servant, Dad spent 40 plus years as a charter member of the Butte Mile High Lions. As a Lion, he held every position including International District Governor. This experience allowed him to travel extensively around the world setting up conventions. Joe married Marlene Holland in 1956. Although the marriage did not work out, together they raised their four children, Joe, Dan, Alyssa and Judi. Dad always referred to his children as "the brothers and the twins". His devotion to and love for his children were a hallmark of his life. His grandchildren and great-grandchildren added a new dimension of love. Joe was preceded in death by two brothers, George and William, who died in infancy, his parents, Alice and George, his sister Alice Delaney, and his beloved daughter, Judi. He is survived by his children, Joe, Dan, Alyssa and her husband, Terry MacDonald. He had a special place in his heart for Kerrie Siragusa and Mary Ann Thom. Also surviving are his grandchildren, Brandon and Bobbi, Kori, Brian, DaLyn, Jestine, Michele, Jordan and his three great-grandchildren, Briel, Chandler and Payton. In addition, Joe is survived by his sisters Betty Bowden and Mary Kay Pearce, Marlene Holland, numerous nieces and nephews, along with many special friends. He is also survived by best four legged buddy, McGruff. In lieu of flowers, donations can be made in Joe's name to the Paul Clark Home/McDonalds Family Place or a charity of your choice. In the year Dad was born, 1925, Emile Coue brought self-esteem to the US proclaiming, "Every day in every way I am getting better and better". Dad, every day in every way you just got better and better. God bless you Dad and Gramps. We love and miss you.

Joseph E. Powers, 89, died August 18th surrounded by his loving children and a special angel. He was born on September 2, 1925 to Alice and George Powers. He grew up alongside three sisters, Betty, Alice, and Mary Kay and took pride in maintaining... View Obituary & Service Information

The family of Joseph E. Powers created this Life Tributes page to make it easy to share your memories.

Send flowers to the Powers family.