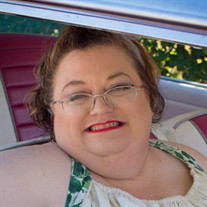 Joyce Kay Rautio, age 53, died Thursday October 11, 2018 with her children by her side. She left this world to be with her Heavenly family and engage in a peaceful afterlife. She experienced many health issues during the last years of her life that later lead to her passing, but she never let this stop her from loving and spending time with her children and grandchildren. Joyce was an amazing grandmother, daughter, sister, wife, mom, and friend. Everyone who met her loved her. Joyce was born on June 22, 1965 in Butte, MT, to Ben and Janice Dombroski. She lived the majority of her life in Butte, until the birth of her oldest daughter Brittany, after which she moved to Utah with her husband, Mark Rautio, where they later had three more daughters and began their life practices of that in the Church of Jesus Christ of Latter Day Saints. The time in Utah, 13 years, was not very long, but it brought on many great memories and friendships before bringing the family back to Butte, MT. Joyce worked hard to raise her children, care for her husband, and educate herself in hopes of developing a career as a teacher. She was unable to finish her Bachelors Degree in education, due to her husbands medical issues and death, but she never gave up her love of working with children, especially those with disabilities. Joyce dedicated her life to her husband and children. She overcame the loss of her husband, father, and many others while refusing to give up. She had a pure and kind heart that allowed her to do everything that she could for others. Joyce is survived by her mother, Janice Dombroski, of Boise, ID; brother and sister-in-law Robert and Karola Dombroski of Spokane, WA; brother and sister-in-law Ronald and Julie Dombroski of Middleton, ID; daughter and son-in-law Brittany and Robert Gee of Middleton, ID; daughter and son-in-law Tiffany Rautio and William Graves-Boyle of Butte, MT; daughter and son-in-law Mallory Rautio-Gustafson and Dale Gustafson of Butte, MT; daughter Whitley Rautio of Butte, MT; granddaughters Samara Gee of Middleton, ID, Ada Rautio-Boyle, Zenadaya Gustafson, Zion Gustafson, Zayna Gustafson, and Zelina Gustafson all of Butte, MT; grandson Austen Gee of Middleton, ID; numerous aunts, uncles, nieces, nephews, and other extended family members. Services have been postponed.

Joyce Kay Rautio, age 53, died Thursday October 11, 2018 with her children by her side. She left this world to be with her Heavenly family and engage in a peaceful afterlife. She experienced many health issues during the last years of her... View Obituary & Service Information

The family of Joyce Kay Rautio created this Life Tributes page to make it easy to share your memories.

Send flowers to the Rautio family.