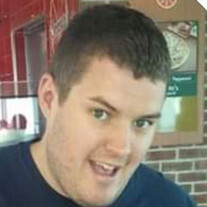 Keith Arthur Helstrom passed away at the University of Utah Medical Center on Wednesday, September 23, 2020. He was born in Butte Friday, September 5, 1986, the first of three children to Don and Betty Helstrom. Keith graduated from Butte High School 2005 and attended Montana Tech in pursuit of a Criminal Justice Degree. He was an Eagle Scout and a member of the Church of Jesus Christ of Latter Day Saints as a youth and held the Aaronic priesthood. He loved competition and sports including football, basketball, Jui Jitsu, video games and board games. Keith worked at Bonanza Freese through high school and worked at the local theater, then as a bouncer. He married Kathryn Butt on June 20, 2015 and got the job he loved as a maximum-security correctional officer at the Montana State Prison. Keith spoke often of his time working at MSP and of how he planned to return to work there. Keith was a fighter from birth. He fought a very hard fight for three years to overcome a virus which affected his heart and ultimately lead to his death. Keith was able to make his own decisions up to the end of life. He had a very big heart full of joy and a love of life. He had a great sense of humor, was very intelligent and lived his life in service to others. He had his wife and brother Kyle at his side at the time of death. He is preceded in death by his grandparents, Bob and Betty Helstrom, his grandfather, Royce D. Drew and his aunt, Carol Roberts. He is survived by his wife, Kathryn, his parents Don and Betty Helstrom, his brother and sister-in-law, Kyle and Sarah Helstrom, his sister Kate Helstrom, grandmother, Catherine Drew, his aunt, Jean Drew, uncles, Rocky Roberts and R. D. and Cheryl Drew, cousins Krista Roberts, Kalin Roberts, aunt and uncle, Arlee and David Kachensky and cousin Christine and Matthew Kachensky.

Keith Arthur Helstrom passed away at the University of Utah Medical Center on Wednesday, September 23, 2020. He was born in Butte Friday, September 5, 1986, the first of three children to Don and Betty Helstrom. Keith graduated from Butte... View Obituary & Service Information

The family of Keith Arthur Helstrom created this Life Tributes page to make it easy to share your memories.

Keith Arthur Helstrom passed away at the University of Utah Medical...

Send flowers to the Helstrom family.