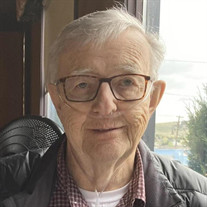 Larry Edward Buckley passed away early Sunday morning, January 3, 2021 at his home in Butte. He was born on Thursday, March 25, 1943 to William Edward and Katherine Louise (Ludwig) Buckley. Larry was raised by his grandparents William S. and Catherine R. Buckley. After attending the Hawthorne School he graduated from Butte High School in 1961 as a 4 year member of the Butte High School golf team. Golf remained a passion for Larry throughout his life. Larry graduated from Western Montana College in 1964, student-taught at the Grant School, then taught for 1 year at the Whittier School. Choosing a 4 year stint in the Air Force, he served his country with pride in Texas and Germany. His service provided a chance to travel Europe extensively, and as far afield as Libya. After his military service, he returned to WMC and received a MS in counseling. He taught at the Whittier, Madison, Hillcrest, and Kennedy schools. His 30 year teaching career concluded as an elementary school counselor and later at Butte High. He cherished his career - his students and all of his treasured colleagues. He also enjoyed many wonderful outings camping, fishing and hunting with dear friends and family. After an international romance, Larry married Julie Arndt in Seattle WA on June 11, 1970. Together they made their home in Butte, where they raised their two sons. He is survived by his wife Julie of Butte, sons and daughter-in-law Brent and Jessica Goldberg Buckley of Texas and Neil Buckley of Philipsburg. Surviving grand-children are Zack, Nick and fiance Lacie, all of Kansas; Finlen and Ledger Buckley, as well as Sherman and Graelyn Buckley. Also surviving are his sister Carol F. Kenville with husband Tom of Fargo ND and Naples Fl, brother William B. Buckley of Tacoma WA, with their families; in-laws Karl and Hannelore Arndt, Anna Mebs of Germany with their families; cousin Denise Buckley of Butte with her beloved family, as well other extended family here and abroad. He is preceded in death by his beloved grandson Alexander Buckley. Should you choose a memorial, please consider the Highland View Golf Course Butte MT or your local Food Bank. zoom link https://zoom.us/j/97732022232?pwd=VFFvWk9SbEJYQ2JvOVhIMU1DZWFSQT09

Larry Edward Buckley passed away early Sunday morning, January 3, 2021 at his home in Butte. He was born on Thursday, March 25, 1943 to William Edward and Katherine Louise (Ludwig) Buckley. Larry was raised by his grandparents William S. and... View Obituary & Service Information

The family of Larry Edward Buckley created this Life Tributes page to make it easy to share your memories.

Send flowers to the Buckley family.