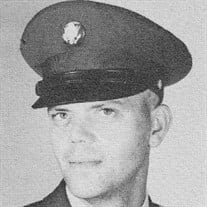 Larry Laverne Sedars passed away Monday afternoon, February 15, 2021 in St. James Healthcare. He was born Thursday, September 5, 1940 in Perry, Iowa to Arthur H. and Marvel L. (Stump) Sedars. The family moved to Butte in 1953where Larry Attended Butte High School. Larry was an avid baseball fan and played baseball in school as well as in the Army. Following high school, he worked on heavy equipment until joining the United States Army in 1963. He served with Company B, 1st Battalion, 1st Brigade at Fort Ord, California and was stationed in Stuttgart, Germany. He was honorably discharged in 1969 and returned to Butte where he again worked as an operating engineer for the Anaconda Company and later ARCO. He later worked for Butte-Silver Bow in the courthouse, jail and civic center until a back injury forced his retirement. Larry married Betty Neely on April 15, 1971 and together they raised 5 children. The family enjoyed many camping trips and spending time outdoors together. Larry enjoyed hunting and fishing as well as tending to his yard. He loved all animals, especially birds. He is survived by his wife of nearly 50 years, Betty Sedars of Butte, daughters and son-in-law, Karen and Charlie Marenos of Butte, Michelle Clark of Great Falls and Jodi Neely of Butte, sons and daughter-in-law, James Neely of Butte and Cameron and Tina Neely currently stationed in Baumholder, Germany. Grandchildren include: Angela and Rob Tibbs, Randy and Catrina Neely, Daniel and Anja Neely, Tony St.John, Brad Stevens and his fiancée Caitlin Yelenich, Lonnie Stevens, Brittnay Childress, Genevieve Sam and Sean Ward. Great-grandchildren include: Sonny Neely, Shea and James Stevens, Brylee and Lonnie Stevens Jr. Blaise and Jersie Childress, Jayce Sam, Taven O’Connell, Zack Davison, Ronen and Amaree Sam. Also surviving are his sisters-in-law and brothers-in-law, Wanda and Ralph Craddock of Butte, Dorothy and Leon Brewer of Tennessee, Judy and Ron Thompson of Georgia and Sheri Anderson of Oregon as well as numerous nieces and nephews. Besides his parents, he is preceded in death by his brother Al Sedars and brother-in-law, Bob Jamison. Cremation has taken place. Graveside interment services will be conducted in the Spring and will be announced. Memorials in memory of Larry may be made to the Butte Food Bank or the Butte Rescue Mission.

The family of Larry Laverne Sedars created this Life Tributes page to make it easy to share your memories.

Send flowers to the Sedars family.