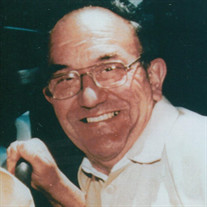 Mr. Laurence George “Larry” Dunville passed away Saturday morning, January 11, 2020 at the Springs Assisted Living. He was born in Butte Tuesday, July 22, 1930 to Harold and Louise (Lestiko) Dunville and was raised in Rocker. He attended grade school in Rocker and graduated from Butte High School in 1950. Larry worked for the railroad when he was young and later at the Butte Mines Machine Shop. He then went to work in the Montana Power Automotive Shop where he worked until his retirement. Larry served his country in the United State Army and later as a Chief Petty Officer in the US Naval Reserve. He was a longtime and active member of St. Ann’s Parish, the Butte Elk Lodge, BPOE # 240, where he was honored to serve as Exalted Ruler and enjoyed camping, hunting and fishing. Larry married Marlene O’Connor in Butte on June 6, 1956 and she passed away in 2002. Larry married Diane Vanina on April 10, 2003 and they have been inseparable for the past 17 years. Survivors include his wife, Diane Dunville, son and daughter-in-law, Paul and Kim Dunville, daughter, Annette Brown all of Butte, grandchildren, Mark Dunville and Heidi, Katie Dunville and Matt, Sean Dunville, Warren Brown and Timbree and Thomas Brown and Rebecca. Also surviving are his three great-grandchildren, Nolan, Lincoln and Hudson, his sisters-and brothers-in-law, Marilyn Vanina and Bob Fournier and Sue and Max Decker and their family, nieces and nephews of the O’Connor, Schmechel, and Mason families. Larry was preceded in death by his sister Hazel and Bill Mason and nephew John Mason, very close brother-in-law Willam “Oakie” and Eileen O’Connor, and sister-in-law Patricia and Paul Schmechel, and granddaughter Kelly Dunville.

Mr. Laurence George &#8220;Larry&#8221; Dunville passed away Saturday morning, January 11, 2020 at the Springs Assisted Living. He was born in Butte Tuesday, July 22, 1930 to Harold and Louise (Lestiko) Dunville and was raised in Rocker. He... View Obituary & Service Information

The family of Laurence George "Larry" Dunville created this Life Tributes page to make it easy to share your memories.

Send flowers to the Dunville family.