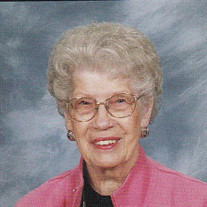 LaVerne E. Taulbee, 95, longtime resident of Butte Montana passed away on May 25, 2018 at her home surrounded by her family and caregivers. LaVerne was born in 1923 at Medicine Lake, Montana in a birthing home, common at that time in rural settings. Her parents, Hans and Ida Hanson lived on a farm in Homestead, a few miles east of Medicine Lake. She lived at that farm through part of first grade, at which time her father became ill and was sent to Fort Harrison Veterans Hospital. Her mother and siblings moved to the Granden Hotel in Helena. Soon, both her mother and sister Alice became ill and LaVerne and her brother Leo were placed in the orphanage until her mother and sister recovered. The family moved to Longmont, Colorado when LaVerne was seven, for about one year while her father recuperated. Shortly thereafter the family moved back to the town of Homestead. Once again, she started first grade (for the third time) and completed eighth grade at Homestead Elementary and twelfth grade at Medicine Lake High School. LaVerne's first summer job her in junior and senior years was working on the Olsen farm doing household chores and feeding the harvesters, earning fifty cents for a twelve-hour day. While she always wanted to be a hairdresser, there was only enough money to send her to nursing school in Havre in 1942. She was a member of the graduating class of 1945. She went on to work at Deaconess Hospital in Havre until May of 1946 and then worked at the hospital in Cut Bank, where she met Dan. They married after a brief romance, knowing that they had met “the one". Shortly thereafter, in 1947, they moved to Butte, where Dan went to work in the mines. LaVerne and Dan had three children - Mallory, Mitchell and Janelle. Family activities included fishing every weekend during the summers. Aside from that, like many families, life was a lot about work and trying to set a good example for the kids. LaVerne worked at Silver Bow General Hospital for twenty years and was one in the first group of nurses from Butte to go to Salt Lake City for ICU training. LaVerne lost Dan to cancer in 1987 and both her mother and father within one year - a very tough year. While mom was always involved with church over the years, she found time to be involved in more activities after she retired in 1980. She enjoyed altar guild, the quilting group and helping out in the kitchen at Gloria Dei Lutheran. She was also a member of a retired nurses craft group for many years. These activities, crafting and church were where she made and enjoyed her best friends. LaVerne was preceded in death by her mother, father, husband Dan, her son Mallory and her sister Mary. She is survived by her siblings Leo (Eilene) Hanson of Costa Mesa, California, Alice (Jack) Tinger of Mission Hills, California and nieces and nephews. She is also survived by her son Mitchell (Wanda) Taulbee of Butte and daughter Janelle (Larry) McCaffery also of Butte. Dear mom, know that you have always been our guiding light. Your twinkling, happy eyes and constant good humor have helped to navigate the events of our lives. You are so loved and will be so missed. In lieu of flowers, donations may be sent to Frontier Hospice, the American Heart Association, American Cancer Society or a charity of your choice.

LaVerne E. Taulbee, 95, longtime resident of Butte Montana passed away on May 25, 2018 at her home surrounded by her family and caregivers. LaVerne was born in 1923 at Medicine Lake, Montana in a birthing home, common at that time in rural... View Obituary & Service Information

The family of LaVerne E. Taulbee created this Life Tributes page to make it easy to share your memories.

Send flowers to the Taulbee family.