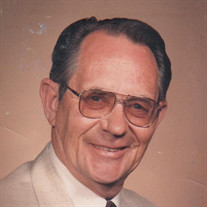 Lee R. “Hap” Collins passed away Wednesday morning in the Community Hospital of Anaconda. He was born Thursday, March 18, 1926 in Half Moon, Montana to Pearl (Ekman) and Earl Collins. He grew up around Flathead Lake and attended school in Rollins, Montana where his family had about five acres of land. Hap shared farm chores with his three older brothers and younger sister. He was using a plow to till the soil by the age of 6, planting a wide variety of produce including watermelons, corn and acres and acres of peas. He was also known to pick a cherry or two that the lake is famous for. He left home at the age of 15, going first to Idaho Falls before moving to Anaconda to work for the Intermountain Transportation Company for a total of 40 years. He was an excellent mechanic and retired as Superintendent of Maintenance for the company in 1986. Hap met the love of his life in a rowboat on Flathead Lake and claimed it was “love at first sight.” He married Elaine Shirley Wallen in Butte on March 26, 1943 and was drafted one month later to serve in the U.S. Army, 43rd Infantry Division. He was wounded in action in Luzon in the Philippines on March 28, 1945 for which he received the Purple Heart citation. He also received a Bronze Star medal for meritorious achievement in active ground combat against the enemy while in Luzon, along with numerous other medals including the Army Good Conduct medal. Lee R. Collins was proud to serve his country and took this responsibility very seriously. To their marriage, two children were born: LeRoy Allen in 1946 and Rebecca Joy in 1951. IN 2018 Hap and Elain celebrated 75 years of marriage. Hap was a member of the VFW, the DAV, the American Legion and the Anaconda Presbyterian Church. Our dad was a man of many skills and talents. He enjoyed hunting and fishing in his earlier years and tooled leather work for belts. He also tried his hand at oil painting. In later years he moved on to the skill of wood carving of clocks. He had a passion for eagles and more than a few people around the country are lucky enough to own one of his eagle carving in moose horn. Most recently he painted and carved several of the center pieces atop the Carrousel at Columbia Gardens in Butte. Dad was a devoted father who taught us “the value of a dollar” and the importance of family. He was friendly and outgoing; even to strangers. People like him. We loved him. He will be greatly and deeply missed. He is flying on eagle’s wings at last. Lee is survived by his wife of 75 years, Elaine, of Anaconda, sister, Arleta Pilcher of Anacortes, WA, son, Lee (Joy) Collins of Anaconda, daughter, Becki Eggum of Sidney, grandchildren: Dave (JaLina) Collins of Helena, Mark Collins of Bozeman, Erik (Becky) Brownlee of Laurel, Krista Brownlee of Billings, great-grandchildren: Nita Collins of Helena and Sean Baxter of Sidney. He is preceded in death by his parents, Earl and pearl Collins, brothers, Oren, Vern and Gene Collins and infant son, David Earl. We want to extend our deepest gratitude and appreciation to all the doctors and staff of Anaconda Community Hospital and all of Dad’s friends on the staff of the Anaconda Community Nursing Home. You folks made all the difference and are the best of the best!

Lee R. &#8220;Hap&#8221; Collins passed away Wednesday morning in the Community Hospital of Anaconda. He was born Thursday, March 18, 1926 in Half Moon, Montana to Pearl (Ekman) and Earl Collins. He grew up around Flathead Lake and attended... View Obituary & Service Information

The family of Lee R. Collins created this Life Tributes page to make it easy to share your memories.

Send flowers to the Collins family.