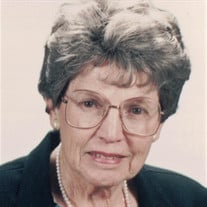 Lenore Muriel (Waters) Truscott, born December 7, 1921 in Butte, Montana, passed away March 19, 2019 in Lewiston, Idaho. She was the only child of Dolly (Temby) Waters of Elkhorn, MT and Stuart Waters. Stuart, born in Cornwall, England, was the proprietor of The Hub, a men’s western clothing store that served Butte for over 50 years. Lenore endured the economic hardships of life brought on by both the Great Depression and WWII. The attack on Pearl Harbor occurred on Lenore’s 20th birthday. During her youth she attended Lincoln Elementary, Butte High School and then Butte Business College. For many years she was a member of Butte Chapter #39 Order of the Eastern Star and the Rebekahs. In high school she worked as a secretary/clerk for her uncle, owner of Len Waters Music Store. She played piano for dances at Butte’s widely known Columbia Gardens. In 1944 Lenore Waters married fellow Butte High School graduate, Glenn Truscott, who by then was a US Navy man and WWII veteran. Lenore and Glenn’s wedding took place in Astoria, OR, where he was stationed. A Greyhound bus served as their honeymoon transportation. Lenore then lived at all the stateside naval air bases where Glenn was assigned. The list includes Coronado, CA, twice near Corpus Christi, TX, and lastly on Whidbey Island, WA. Between the two Texas assignments she spent 18 months with him in the Philippine Islands when an assignment took them to the Sangley Point Naval Air Base, across the bay from Manila. Half of those months were spent residing off-base in the town of Cavite. The trip out to the islands was on a large propeller-driven airplane, which required island-hopping to get there and the navigator taking sun and star shots with a sextant in the passenger cabin. The 21-day return to the United States was aboard a military ship filled with Navy Seabees. She accomplished all this with three young sons in tow. Lenore and her family would often return to Butte to visit her parents and other relatives. She was a devoted daughter. Dolly and Lenore could often be seen walking the streets of Butte arm-in-arm. Likewise, she was a devoted mother no matter where in the world she found herself with her sons – preparing their often requested meal of Cornish pasties and saffron buns, dishes she passed along from her mother. Lenore took up a second career as a minister’s wife when Glenn retired in 1960 and the family moved to Deer Lodge, MT, where he was ordained as a Methodist minister. She assisted at all of Glenn’s churches by playing piano, teaching Sunday School and directing the choirs. This second career took her to many churches and communities throughout western Montana. These were: Townsend, Radersberg, Toston, Fromberg, Edger, Roberts, Cascade, Sunnyside, Sand Coulee, Dutton, Brady, and finally Anaconda. Butte once again became her home when Glenn retired from the ministry in 1983. While attending that city’s Mtn. View Methodist Church, the church of her childhood, she remained active in the United Methodist Women, children’s ministries, and directing the choir. Her service continued at the Clarkston, WA, Methodist Church when Lenore and Glenn moved from Butte, to Clarkston in 1998. However, Lenore and Glenn continued to travel the globe, mostly on cruise ships. Lenore died at age 97, three years after Glenn and their 72 years of marriage. She is survived by her three sons and their wives: Glenn Jr. and Roberta of Coeur d’Alene, ID, Don and Melody from Bainbridge Is., WA, and Tom & Tana in Clarkston, WA. In addition, she has five grandchildren—Seth, Ben, Hana, Ian and Ciera, plus great-grandson, Thomas, and great-granddaughters, Iolana and River. The family wishes to thank the many devoted caregivers who provided years of love and respect to Lenore while she dealt with memory loss. In June a memorial service will be held at the Clarkston Methodist Church in Clarkston, WA. For details contact Tom Truscott at 509-295-1626. Please direct any memorials to the Aldersgate United Methodist Church, 1621 Thornton Ave., Butte, MT 59701 for its music program as she loved to sing in church choirs.

Lenore Muriel (Waters) Truscott, born December 7, 1921 in Butte, Montana, passed away March 19, 2019 in Lewiston, Idaho. She was the only child of Dolly (Temby) Waters of Elkhorn, MT and Stuart Waters. Stuart, born in Cornwall, England, was... View Obituary & Service Information

The family of Lenore Muriel Truscott created this Life Tributes page to make it easy to share your memories.

Send flowers to the Truscott family.