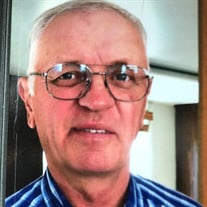 Mr. Leo J. McCracken passed away Saturday, April 6, 2019 at his home south of Butte. He was born in Butte in Butte, Wednesday, January 9, 1952 to Wayne and Leona (Gardiner) McCracken. Leo attended local schools, Montana Tech, received his degree in mathematics from the University of Montana and also earned his teaching degree at Western. He taught school in Harlem, Montana and Columbus, Montana where he also coached girl’s basketball, before embarking on his career in road construction. Leo worked for several contractors around the state and it would be hard to drive any distance in Montana without driving on some road work that he was involved in. He also worked many years for Butte-Silver Bow as a crusher operator. Leo enjoyed woodworking and was a member of the Operating Engineers, Local # 400. Everyone who met and knew Leo came away learning from him. He is preceded in death by his mother, Leona McCracken and longtime friend and companion, Sharon Kober. Survivors include his father, Wayne McCracken of Butte, brothers and sisters-in-law, Allen and Harriet McCracken of Brighton, Colorado, Earl and Bev McCracken of Dayton, Nevada, Kurt and Margaret McCracken of Richland, Washington, numerous nieces and nephews and Sharon’s children and grandchildren. Cremation has taken place. Memorial services will be conducted Friday morning at 11 o’clock in Wayrynen-Richards Funeral Home. A celebration of his life will be held at St. Ann’s Fellowship Hall on Saturday, April 13, 2019 beginning at 1 pm. A sincere thank you is extended to Charlene Messick for all the help and time spent with Leo over the past several years. Express condolences at www.wayrynen-richards.com.

The family of Leo J. McCracken created this Life Tributes page to make it easy to share your memories.

Send flowers to the McCracken family.