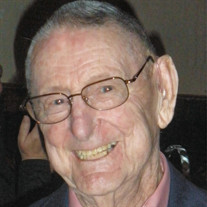 Mr. Leo Edward Mullen passed away Tuesday evening in The Springs at Butte. He was born January 11, 1921 in Brooklyn, New York to Thomas and Winifred (McKeon) Mullen and attended schools in New York and Connecticut. As a teen, he joined the Civilian Conservation Corps and was assigned to work in the Coeur d'Alene area where he developed his love of the Rocky Mountain area. He served his country faithfully in the United States Navy as a Marine Corp medic for 20 years and it was at a U.S.O. dance in Philadelphia that he met Grace L. Esslinger. They were married in Brawley, California on February 6, 1942. She preceded him in death on May 7, 2014. Leo worked as a customs agent for many years in California and Hawaii before finally retiring to Kalispell. He was an active member of the Ancient Order of Hibernians, the Knights of Columbus, and the Marine Corps. Auxiliary. He and Grace traveled extensively and loved to go out for an evening of dinner and dancing. He enjoyed fishing and bowling and while living in Kalispell, would go to the local grade school where he taught cribbage to the fourth graders to improve their math skills. At the age of 70, he was teaching aerobics to the "old people" in the nursing home in Kalispell. He was an avid sports fan and it was said that if paint drying was classified as a sport, he would have watched it. Leo is survived by his daughters Judith Mullen of Hawaii, Teresa Dunn of Whitefish and Barbara and Wally Lindquist of Butte. Grandchildren include: Erin and J.T. Wood, Ryan Dunn, Sarah Clark, and Kelsey and Kenny Allen. Also surviving are his great-grandchildren, Parker, Camden, Saffron and Scarlet, as well as his two favorite nieces, Susan Moyer, and her daughter, Shannon Montgomery. Cremation has taken place and he and Grace will be interred together at the National Memorial Cemetery of the Pacific in Hawaii. The family asks that any memorials in his memory be made to Alzheimer Foundation, Wounded Warriors, or Chelsea Bailey Animal Shelter.

Mr. Leo Edward Mullen passed away Tuesday evening in The Springs at Butte. He was born January 11, 1921 in Brooklyn, New York to Thomas and Winifred (McKeon) Mullen and attended schools in New York and Connecticut. As a teen, he joined the... View Obituary & Service Information

The family of Leo Edward Mullen created this Life Tributes page to make it easy to share your memories.

Send flowers to the Mullen family.