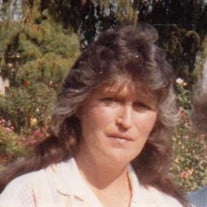 Linda Marie Butler passed away Saturday morning, May 16, 2020 in St. James Healthcare. Born in Butte, Friday, June 3, 1949 to John Ernest and Gladys (Mysse) Brien, she attended schools in Butte and Twin Bridges where she graduated high school. She worked where she was loved, in many restaurants in Butte and volunteered at the North American Indian Alliance. Linda was a huge Elvis fan, enjoyed playing BINGO and adored her grandchildren. Most of all, Linda had a great sense of humor, was very loving and would help anyone in need. She was amazing. Miss you Mom! She married the love of her life, Joseph D. Butler in Coeur d’Alene, Idaho. Together they raised her first daughter, Dee Dee who became a Special Angel for them. Together they had Joseph and Kimberly and later adopted Sara. She is preceded in death by her loving husband Joe, her first daughter Debra Butler, grandson, Nathan Riley and eight siblings, Patricia Brien, Michael Brien, Marlene Brien, Anna Lee Brien, Teddy Brien, Dorothy Alexander, Lisa Mankins and Debra Lochrie. Survivors include her son Yoseph and Dannette Butler, daughters, Kimberly Butler, Sara Butler all of Butte, brothers Terry Brien of Great Falls and Dan and Rita Brien of Phoenix, sisters, Nicole Webster of Butte and Rosalie (Brian) Walters of Grand Rapids, North Dakota, grandchildren: Taylor, Tori, Sophia, Meranda Tyler, Nichole (Shane), Brandon, Josie, Zayden, AJ, Levi, Jericho, Stefen, Debranna, Macelynne, Presley, great-grandchildren: Keegan and Amiyah, too many nieces and nephews to name but she loved each and every one of them. Other survivors include her sister-in-law, Kathy (Larry) Davis, her very loving niece, Sherry Sullivan and her husband’s uncles, Al and Frank Beavis all of Butte. Cremation has taken place. Private family memorial services will take place. Memorials may be made to a charity of the donor’s choice.

The family of Linda Marie Butler created this Life Tributes page to make it easy to share your memories.

Send flowers to the Butler family.