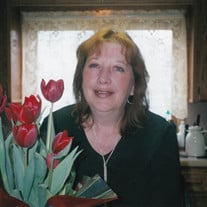 Linda Lee Lubick , a devoted wife and mother, passed away Wednesday evening in a local hospital surrounded by her loving family. She was born in Butte, Monday, April 16, 1951 to Walkerville natives, Ernest and Dolores (Ibsen) Osier. Linda attended the Sherman School, was active in Girl Scouts and attended Virginia's School of Dance. She graduated from Butte High School and later attended Montana Tech. She and Thomas Lubick were married in Butte on December 16, 1972, and together they raised two daughters, Nicole and Lisa. Linda enjoyed ceramics, sunsets on her deck and absolutely loved being grandmother to her only granddaughter, Alyssa. She is survived by her husband, Thomas Lubick of Butte, her mother, Dolores Osier of Butte, daughters, Nicole Lubick and Lisa Lubick-Patton both of Belgrade and granddaughter, Alyssa Winstead of Bozeman. Also surviving are her sisters-in-law and brothers-in-law: Judy and Bill Henderson of Butte, Walter and Patricia Lubick of Great Falls, Pam and Larry Lee of Grand Junction, CO, Cecelia Lubick of Butte, Dina Osier of Rock Springs, Wyoming as well as numerous aunts, uncles, cousins, nieces and nephews. She is preceded in death by her father, Ernest Osier, brother, Randal Osier, mother and father-in-law, Walter and Phyllis Lubick as well as her brothers-in-law, Frank and Dan Lubick.

The family of Linda Lee Lubick created this Life Tributes page to make it easy to share your memories.

Send flowers to the Lubick family.