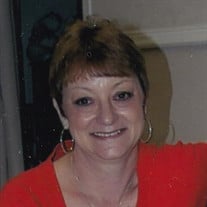 Linda known to many as Lynn, passed away unexpectedly on November 24, 2O17. She was born on June 3, 1957 to Warren and Mabelou Hoida Dorville. She attended local schools, graduating from Butte High School in 1975. After High School she married her high school sweetheart Bruce Hemphill, they later divorced but remained close friends. Lynn then married Glen Gifford; they later divorced but still remained close friends. With the marriage to Glen came two children Jeanie and Jason, which she always thought of and treated as her own. This in turn started the expansion of her kids; she never liked the words step or in-laws so it became my kids when referring to any of them. Her greatest joy was her grandchildren and she was known to them as Granny. They had their Granny completely wrapped around their fingers, rarely was the word no ever used when it came to them. Many hours were spent doing whatever they wanted and always the biggest smile on her face when her grandkids were around. Lynn then met Kemp “Doc” Roberts, her soul mate. With Doc they set up shop on Harrison Avenue and ran a photography studio, Fine Photography by Rob. She shared her life with Doc and they were always on the go until his passing in 2007. Lynn worked many jobs throughout her lifetime, starting at Warm Springs State Hospital where she worked for over 20 years, she worked side by side with Doc at the Photography Studio for many years, she was Activities Director for Butte Convalescent/Genesis Healthcare, and then she went into doing Home Health care for the last few years. She was a kind and caring person, she enjoyed taking care of others. For many years she cared for her Grandmother Mable Dean who lived to be over 100, and she had a special place in her heart for the older generation. She also had a big heart when it came to animals. Always having a dog, cat or even a few of each in house at times. No stray stayed a stray if Lynn was around. Which proves what a huge heart of gold she really had. She was preceded in death by her; Husband Kemp Doc Roberts, Son Jason Gifford, Parents Warren and Mabelou Dorville, Brother Don Dorville, Grandmother Mable Dean and Niece Tiffany Dorville. Lynn is survived by her; Sister Judy (Leroy) Donovan, Daughter Jeanine (Steve) Johnson, Rachel (CJ) West, Robin (Granger) Baker. Grandchildren: Marcus Rashleigh, Rylee & Zachary Johnson, Anthony (Ann), Glen & Jason Gifford Jr, Andrew Dillon and Alex King. Cousins, Dan Hoidaand Kathy Ruby, niece, Amy Dorville Black, great niece, Chloe Black, nephew, Mark Manweiler. Close friends Glen Gifford, Bruce Hemphill, and Docs Children. She is also survived by many numerous friends and extended family, which are too numerous to mention. Family requests memorial donations be made to Buttes Humane Society. Until we meet again, watch over us always and We Love You Granny.

Linda known to many as Lynn, passed away unexpectedly on November 24, 2O17. She was born on June 3, 1957 to Warren and Mabelou Hoida Dorville. She attended local schools, graduating from Butte High School in 1975. After High School she married... View Obituary & Service Information

The family of Linda Lee Roberts created this Life Tributes page to make it easy to share your memories.

Linda known to many as Lynn, passed away unexpectedly on November...

Send flowers to the Roberts family.