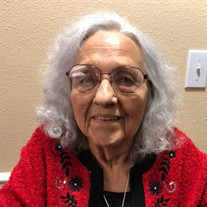 Lois Jean (Panich-Cross-Carlson) passed away on January 25, 2018 surrounded by family in Butte, Montana. She was born in Butte Montana on March 17, 1937 to Mary (Sodja) and John Panich. In her early years, she spent many hours at the Columbia Gardens, playing with her brother Johnny, and friends Janet and Joanne. She attended local Catholic elementary schools and graduated from Butte High School. Lois married Elmer Cross in 1955. She and Elmer traveled for several years until they settled in Butte to raise their family of six children. After Elmer’s passing, Lois married Robert Carlson and was blessed with another daughter. She can be remembered cooking homemade pasties, doing crafts, playing card games or bingo, and singing along to Elvis Presley. Her caring nature was demonstrated in the way that she took care of her mother and aunt and by her dedication to raising her children, grandchildren, and numerous daycare kids. Raising children was her greatest joy. She was a loving woman who everyone relied on for advice, a smile, a 3-hour conversation, or a warm meal. Lois was preceded in death by her parents, husband Elmer Cross, daughter Tammy Worley, and brother John Panich. Lois is survived by her children: Elmer Jr. (Robin) Cross, Mary Ann Cross, Peggy (James) Owers, Darrel (Cassandra) Cross, Melodi (Dennis) Klemp, and Patricia (Eric) Nyberg. She is also survived by her grandchildren Michael, Katrissa, Chelcy, Sierrah, Eric, Dustin, Bailey, Dillon, Colby, Courtney, Gracie, Brittney, Bryce, Kevin, and Cody; numerous great grandchildren, extended family and countless friends, and the many children who were not her own but she loved as though they were. A reception will immediately follow service in Wayrynen-Richards Community Center. Donations in memory of Lois may be made to Our Lady of the Rockies (3100 Harrison Avenue Butte, MT 59701) or the Spirit of Columbia Gardens Carousel (3100 Harrison Avenue Butte, MT 59701).

Lois Jean (Panich-Cross-Carlson) passed away on January 25, 2018 surrounded by family in Butte, Montana. She was born in Butte Montana on March 17, 1937 to Mary (Sodja) and John Panich. In her early years, she spent many hours at the Columbia... View Obituary & Service Information

The family of Lois Jean Carlson created this Life Tributes page to make it easy to share your memories.

Send flowers to the Carlson family.