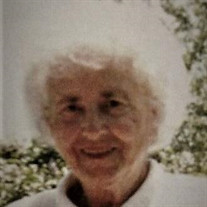 Lola M. Flanick, 97, of Butte, Montana passed away October 25, 2018, at Fairfield Village Assisted Living in Layton, Utah. Lola was born in Tuscany, Italy on January 20, 1921 to Giulio and Anna Martinelli. Her father came to the United States from Italy to work in the Butte mines. At the age of 18 months, Lola and her mother rejoined him in the Butte community of Meaderville. Lola attended the Franklin Grade School in Meaderville, graduated from Butte High School in 1939, then attended Butte Business College. This is where she met her sweetheart, William Flanick. They were married on October 2, 1942. Lola worked in various offices in Butte which included Graybar Electric and Consolidated Freightways. When their son Bill was born in 1955, she became a full-time homemaker. Lola’s interests included cooking and baking, dancing, fishing, more cooking and baking, bowling, crocheting, and more cooking and baking. No one left her home hungry. The one thing she loved most was spending time with her family. Lola is survived by her son Bill (Sherry) of Layton, Utah; her grandchildren Michael (Hillary) Flanick of Pleasant View, Utah, Christopher (Jamie) Flanick of Billings, and Scott Flanick of Billings, great grandchildren Lily, Alexis, Kamberlyn, Taycen and Bridger; Sister-in-law Dolores Martinelli and numerous nieces and nephews. Lola was preceded in death by her loving husband Bill, her mother and father her brother Bruno Martinelli and her friend Andy Anderson. We are forever grateful to Jule Ann Winston for watching over Mom and including her in many family gatherings. We also wish to thank Rae Ann Sanders, Lola’s Senior Companion for her kindness and compassion. Our gratitude also goes to Dr. Wendy Grace, the entire staff at Fairfield Village Assisted Living and Memory Care Unit in Layton, Utah and Encompass Health Care Nurses RandiLyn, Lori, Brittany, Angie and Luis. Rest in peace, Mom. You will forever be in our hearts.

The family of Lola M. Flanick created this Life Tributes page to make it easy to share your memories.

Send flowers to the Flanick family.