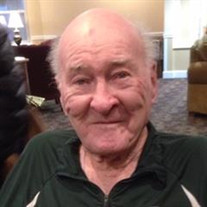 Loren Edward Steadman passed away Sunday, March 24, 2019, at Big Sky Senior Living in Butte. He was born April 11, 1926 in a log cabin on a farm 20 miles from Broadus, MT, called “Coalwood”. In 1927 his family moved to Broadus and lived in the basement of Macy Hall, his Grandparent’s building. Loren moved to Billings in 1934 to live on the "bench" outside of Billings where his Aunt and Uncle farmed. He excelled as an athlete at Billings Senior High School and began his love of boxing as a freshman in the Billings Amateur Athletic Boxing Club. Loren enlisted into the Army / Air Force (AAF) in 1944. He went through basic training in Texas where he was assigned to the B17’s + B24’s as a gunner. Loren continued to box in the Army. As a PFC, he was the Army’s Golden Gloves Light Heavyweight Champion at Buckham Field at Fort Myers. He transferred to Sebring, Florida for training and graduated from Military Police School. He was assigned duty as a MP, patrolling both the base and the town of Sebring. Loren married his first wife Lucy Spires on July 23,1946, after he was honorably discharged as a sergeant. They had one daughter Lucy Baker during their 2 1/2 years of marriage. He met his wife of 68 years, Kathryn M. Robertson in Billings, MT. They were married on Dec. 21,1950. They had three children Colleen, Clint, and Chris. Loren worked for the Billings Police Department, K-G Men's Store, Q ’s Sporting Goods and Buttrey’s Food Stores. At Buttrey's, he was the non-foods manager, working throughout the state reaching his final work destination in Bozeman, retiring after 27 years, August 1986. Upon retirement, Loren and Katie moved to Canyon Ferry Lake. As their health declined, they moved to their daughter and son-in law’s farm. (Colleen & Ted) To know our dad, you had to have a dedication to family, a passion for fishing, a love for hunting, a habit of smoking Swisher Sweet Cigars, a hunger for vanilla ice cream and cold milk, a ritual of Friday Night Fights, an enjoyment for bowling and cards, a fresh book by Louis L’Amour, and late night Gonzaga basketball games. Dad spent his last 1 1⁄2 years at Big Sky Senior Living, where he received fantastic care from the nurses and staff. As we continued to witness the good news of John 3:16 during these last few years, dad knew God loved him even more than we did. And for that we are thankful. He is preceded in death by his wife, Kathryn M. Steadman, son-in-law, Fred Baker, brother Jim Steadman, parents, James and Anona Steadman (McClure), and step-dad Ernie McClure. Survivors include his children, Lucy Baker of Seattle, WA., Colleen (Ted) Fekete of Butte, Clint (Sybil) Steadman of Bozeman, Chris (Gordon) Mundt of Belgrade, his brothers Marvin (Gini) Steadman of Shepherd, David Steadman of Billings, Sam (Christi) McClure of Worland, WY, sisters, Dora (Bill )Jones of Twin Falls, ID, and Verna Jo (Bennett) Harris of Whidbey Island, WA. Grandchildren include: Brandon (Kristen) Steadman, Soren (Valeriya) Mundt, Brad Mundt, Luke Mundt and Hannah Mundt. Great-grandchildren: Adyson and Aiden Steadman, Emil Gasanov, Eva, and Sonia Mundt, all from Belgrade. Also surviving are his extended family, Scott and Tammy Kottas who adopted Loren and Katie to be grandparents to their 4 boys, Kyle, Kody, Kacey and Kameron, all of Canyon Ferry. Cremation has taken place. A celebration for Katie and Loren will be held Saturday, June 22, 2019 at the Holiday Express in Belgrade, Montana from 1 until 4 PM. Contact [email protected] for information.

The family of Loren Edward Steadman created this Life Tributes page to make it easy to share your memories.

Send flowers to the Steadman family.