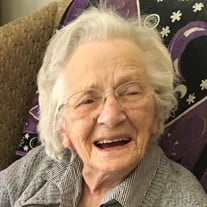 Louise Capp Martin passed away Wednesday evening, November 6, 2019 at Continental Care and Rehabilitation. This youthful spirited woman was born in Whitehall Sunday, September 4, 1921 to John and Clara (Delmoe) Capp. She was the 8th of their 12 children raised on their ranch. It was there that she learned to be a hard worker like her father. She was wonderful cook, seamstress, and gardener like her mother. Louise completed her full k-12 education in Whitehall. Then continued on to served her country in the Women’s Army Corp, and was the Army’s uniform model during World War II. She married the love of her life Daniel Martin at Fort Oglethorpe, Georgia on her 24th birthday, September 4, 1945. After the war they returned to Montana and built their home up with six children. Louise loved her family and friends. She would send frequent letters and drawings, and make phone calls to keep in touch with all of them. Louise loved carrying on witty conversation. This blue-eyed Swiss gal could often be found cooking or lending a hand to those in need. Louise made sure to save a little time to travel the world. The picture on the fridge of her riding a camel as she explored the pyramids speaks to her adventurous spirit. Louise was an accomplished artist, working mainly in oil and watercolors. A mural she painted filled an entire wall in the home of Evil Knievel. In the 50’s and 60’s, she enjoyed league bowling. She remained a strong and independent woman for 40 years after her husband passed away. She spoke often and proudly of her son Tony Martin who also preceded her in death. Louise’s family to carry on her undying spirit include her daughter, Linda Martin of Spokane, WA, sons and daughters-in-law, Daniel and Porcher Martin of Knoxville, TN, Loree Martin of Big Fork, MT, Rick and Michele Martin of Butte, MT, Randy Martin of Missoula, MT and Barry Martin of Spokane, WA. Grandchildren include: Beverly Williams, Ann Giblin, Luke Martin, Daniel Martin, Nicholas Martin, Kayla Martin and Amy Martin. Great-grandchildren include: Riley and Erin Williams, Gage, Tristan and McKenna Giblin, Casten and Maryen Martin, and Braden and Sophie Martin. She is also survived by her brother, Ray Capp and sister JoAnn Merrell.

Louise Capp Martin passed away Wednesday evening, November 6, 2019 at Continental Care and Rehabilitation. This youthful spirited woman was born in Whitehall Sunday, September 4, 1921 to John and Clara (Delmoe) Capp. She was the 8th of their... View Obituary & Service Information

The family of Louise Capp Martin created this Life Tributes page to make it easy to share your memories.

Send flowers to the Martin family.