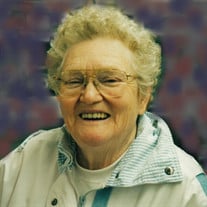 Loyola Martha Masters passed into eternal life on Sunday, December 29th, 2019, in Butte, Montana. She was 94. Loyola was born on June 30th, 1925, to Valentine and Elizabeth Saam in Hastings, Minnesota. She was Baptized at Saint Boniface Catholic Church that summer. Much of Loyola’s childhood was living on a farm raising livestock and crops with her parents and 3 siblings. Before starting high school, the family moved to Rochester, Minnesota. At 14 she began work at a rest home to support herself. This was due to the hardships the family was experiencing. Loyola continued her work and education and graduated from high school in Rochester, Minnesota in 1945. At a New Years Eve dance, 1946, Loyola met her future husband. Wally had accompanied his mother to Rochester for her cancer operation at the Mayo Clinic. Little did they know that this dance would lead to their marriage on April 24, 1948. It would last for 68 years, until Wally’s death on November 26, 2016. Together this couple raised their 3 girls in Munising, MI. The girls were sent to Sacred Heart School and attended Sunday Mass. This was a seed of faith that was passed on and grew by God’s grace. Educationally, she supported all the activities that revolved around church and school. Loyola enjoyed helping with math in particular. She passed on her “math tricks” the nuns had taught her and had fun doing it. Loyola attended all the school band concerts and Silver Echo Drum and Bugle Corps parades and concerts. When snowmobiles became popular, Wally made sure Loyola got her Bombardier wide track snowmobile. She loved the un-groomed trails, feeding her family on the wood stove of their log cabin on Powell Lake and back out on the trails the family all went. This was a typical winter Saturday or Sunday for the family. At home there was one card game the family knew, 500. Usually again, this was a weekend or vacation activity loved by all. Loyola however claimed she just couldn’t get good cards. She loved the game regardless. This game carried on into retirement, even to assisted living. She continued her mantra “just can’t get the cards”. Many laughs came out of this time together. Loyola in her simple manner, was the ears for Wally who had nerve deafness since birth. They made a good team in working out communication. He had the eyes and sixth sense and she had the ears. This was a natural for them. In their later years, they lived five years at the Bishop Noa home in Escanaba, MI and then moved to Butte in 2015 to live with their youngest daughter Joyce. Loyola is survived by three daughters, Mrs. Dianne (Patrick) Toohey of Grand Blanc, Michigan; Mrs. Yvonne (Rick) Nelson of Hastings, Minnesota; and Mrs. Joyce (Terry) Hettick of Butte, Montana; twelve grandchildren, Tim Toohey, Michael (Angela)Toohey, Ryan (Lindsey) Toohey, Mrs. Mary (Dan) AuBuchon, Annie Toohey, Monica Toohey, Mrs. Nancy (Adam) Evans, Eric (Stephanie) Nelson, Mrs. Kim (Gerald) Swanson, Mrs. Sheena (Matt) Cichosz, Kathryn Hettick, and Joshua (Miranda) Hettick, 14 great grandchildren and one on the way this January. Preceding her in death was her husband Wallace R Rodgers, parents Valentine and Elizabeth Saam and siblings Charles Saam, Arnold Saam and Helen Wiederholt. The family wishes to express their gratitude to the Springs Assisted Living and hospice in Butte for their gentle care of Loyola, and a special caregiver, Gabi Hall. Also, a thank you to Father Craig Hanley, who offered prayers and the Sacrament of Anointing for Loyola. These kindnesses were so much appreciated during her time of need. Visitation for Loyla will be January 10 from 7 to 8pm with the Rosary to follow at 8pm at Bowerman Funeral Home in Munising. A Mass of Christian Burial will be celebrated at Sacred Heart Church on January 11, 2020 at 10am with internment at Maple Grove Cemetery in the Spring.

Loyola Martha Masters passed into eternal life on Sunday, December 29th, 2019, in Butte, Montana. She was 94. Loyola was born on June 30th, 1925, to Valentine and Elizabeth Saam in Hastings, Minnesota. She was Baptized at Saint Boniface Catholic... View Obituary & Service Information

The family of Loyola Martha Masters created this Life Tributes page to make it easy to share your memories.

Send flowers to the Masters family.