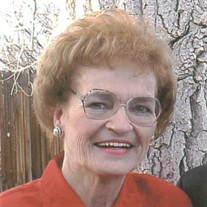 On Sunday, December 10, 2017, Lucy Ann Liddle Woodward passed away quietly after suffering for many years with Alzheimer’s dementia. Lucy was born in Cincinnati, Ohio on January 7, 1929. Her parents were Betty Venable Liddle and Harold William Liddle. Lucy had one brother, and she grew up in the village of Wyoming, Ohio, attending public and private schools. Lucy attended Vassar College, graduating in 1950 with a B.A. in English Literature. After graduation, she attended a business school, then worked in publishing in Cincinnati and New York City. In February 1954, Lucy married Thomas C. Woodward, of Wilmington, Delaware. They moved “way out west” to the state of Wyoming, where Tom was doing geological field mapping as part of his work on a Ph.D. in geology. Tom and Lucy settled in Casper, Wyoming where they lived for 53 years, until moving to Butte, Montana in May 2007. In Casper, Lucy was a longtime member of the Casper Fine Arts Club and the GeoWives Club. She was an accomplished seamstress and gardener. She also loved to do embroidery, including counted cross stitch and needlepoint. Tom and Lucy learned to downhill ski in their forties, packing their three children off to nearby ski areas each weekend. It turned into a delightful family focus, resulting in many ski trips to Colorado and Utah as well. Tom and Lucy also learned to scuba dive and got certified in 1981, leading to more travels, including trips to Hawaii, Greece, the Caribbean, Mexico, Honduras, the Galapagos islands, Egypt and the Red Sea. A lifelong writer, Lucy wrote and published poems, articles, short stories, plays and books. She loved to research and write about the lives of people from history. One of her favorite plays was one she wrote about the Bronte sisters, well-known authors of the classics, Jane Eyre and Wuthering Heights. A friend challenged Lucy to investigate the life and claims of Jesus Christ. Her research resulted in a profound conversion to Christianity, from which she never swerved. If challenged or mocked by her intellectual friends, Lucy would just quietly read the writings of Christian intellectuals, who convinced her once again of the reality of Christ’s claims. She could not argue with the empty tomb or her own answered prayers. Lucy was preceded in death by her husband Dr. Thomas C. Woodward, her parents, her brother Dr. Hal V. Liddle, her niece Kippy Liddle, her sister-in-law Mary Ellen Maroney, and her sister-in-law Anne Clancy. Lucy is survived by her daughter Lynn (Steve) Tarrant of Butte; sons, Tom (Marta) Woodward of Grass Valley, Calif. and James Woodward of Bogota, Colombia; several nieces and nephews; 13 grandchildren and six great-grandchildren. Memorials may be made to New Hope Pregnancy Clinic, 320 So. Idaho; Butte, Montana.

On Sunday, December 10, 2017, Lucy Ann Liddle Woodward passed away quietly after suffering for many years with Alzheimer&#8217;s dementia. Lucy was born in Cincinnati, Ohio on January 7, 1929. Her parents were Betty Venable Liddle and Harold... View Obituary & Service Information

The family of Lucy Ann Woodward created this Life Tributes page to make it easy to share your memories.

Send flowers to the Woodward family.