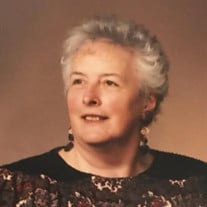 Mrs. Margaret June “Peggy” Sestrich passed away Tuesday afternoon, June 4, 2019 at St. James Healthcare. She was born in Butte Wednesday, June 1, 1938 to James and Helen “Mikey” (Kane) Shea. She attended Butte schools and graduated from Girl’s Central in 1956. Peggy worked for the Montana Power Company until October 21, 1961 when she and James Sestrich were united in marriage at the Immaculate Conception Church. Soon after they made their home in Great Falls for about a year then in Los Banos, California before returning to Butte. She worked at Rush’s Pie Shop on Harrison Avenue before taking the position as receptionist and office manager at Wayrynen-Richards Funeral Home. She graciously served the people of Butte in that role for over 30 years before retiring. Peggy was a longtime member of St. Ann’s Catholic Community the DOES and the Red Hat Society. She and Jim were avid bowlers and she bowled on several leagues. Peggy and Jim were also very accomplished dancers. She is survived by her husband of nearly 58 years, James “Jim” Sestrich of Butte, sons and daughters-in-law, Jim and Cathy Sestrich and John and Jami Sestrich also of Butte, daughter and son-in-law, JoEllen Windham and Marvin Schrader of Spokane Valley, WA, grandchildren: Dylan Sestrich, Sean and Eric Wixston, Michelle Windham, Nacole, Bryson and Evyn Sestrich. Also surviving are her sister, Beverly O’Neill, brothers-in-law, Ken Boyle and Walter O’Neill, brother and sister-in-law, Matt and Karolyn Schultz and sister-in-law, Carol Shea. Other survivors include her cousins Karen Kane and John Trewhella and numerous nieces and nephews including Yvonne Wilhelm. She is preceded in death by her parents, Frank and Mikey Kane, sister, Patsy Boyle, and brother, Jim Shea.

The family of Margaret June "Peggy" Sestrich created this Life Tributes page to make it easy to share your memories.

Send flowers to the Sestrich family.