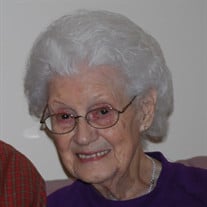 Margaret E. Sikonia passed away Tuesday, June 28, 2016 in a local hospital. She was born February 25, 1921 in Miles City, Montana to John W. and Ella M. (Foreman) Swartz. They lived at Fort Keogh where her father was the station manager. Subsequent positions managing ranches at Willow Creek, Dell and Goldberg, Idaho, found Margaret in very rural and sometimes primitive conditions. She attended "one-room" schools and was an excellent student, being double-promoted by the eighth grade. She spent her first two years of high school in Dillon then moved to Butte High School. Her graduation at the age of 16 was marred by the funeral of her father on the same day. Margaret attended the Butte Business College and began work as a secretary and bookkeeper at Consolidated Freightways in 1938. Frank Sikonia was a foreman there and they were married on December 14, 1940. Margaret was a stay-at-home mother and raised her three children while handling the affairs of small businesses that they operated. She was a life-long member of the Methodist Church and very active in women's groups. She loved music, played piano and organ and encouraged her children's music education. Later in life she returned to work as a bookkeeper at the Silver Bow General Hospital and the Crest Nursing Home. Margaret's retirement years included many volunteer activities and travel. She was blessed with excellent health through her 95th birthday. Margaret was preceded in death by her husband Frank on August 22, 1992, her brother, John W. Swartz on June 1, 2010 and two grandchildren, Kimberley and Jessica Matthiesen. Survivors include her sons and daughters-in-law, Bob and Mary Sikonia of Manhattan Beach, CA and Jack and Donna Sikonia of Bend, OR, her daughter and son-in-law, Karen and Ken Matthiesen of Plains, MT, grandchildren: Molly Sikonia, Heidi Walsh, Kathleen Dyer, Justin Sikonia, Ian Sikonia, Cynthia Plasters, Dianna Sanchez, Anna Hirsch and Nancy Hall. Also surviving are twelve great-grandchildren. In lieu of flowers, memorials in memory of Margaret may be made to the United Methodist Committee of Relief (UMCOR).

Margaret E. Sikonia passed away Tuesday, June 28, 2016 in a local hospital. She was born February 25, 1921 in Miles City, Montana to John W. and Ella M. (Foreman) Swartz. They lived at Fort Keogh where her father was the station manager. Subsequent... View Obituary & Service Information

The family of Margaret Ella Sikonia created this Life Tributes page to make it easy to share your memories.

Send flowers to the Sikonia family.