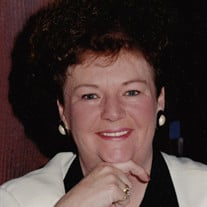 Margaret Elizabeth “Peggy” St. John passed away Thursday afternoon in a Missoula hospital surrounded by her family. Peggy was born in Butte August 1, 1938 to Thomas F. and Agnes M. (Murphy) Connolly. She attended St. Joseph’s Grade School and graduated from Girl’s Central in 1956. On November 8, 1958 she was united in marriage with Robert St. John in St. Joseph’s Church and together they embarked on a love affair of nearly 60 years. They lived in Germany while Robert was in the military and loved exploring Europe. They lived in several states while Robert was getting his medical education but Butte was always home and they returned home to raise their family. Her uncle, Father Michael Murphy who served at Notre Dame, encouraged the strong catholic values and traditions Peggy shared with her family. Peggy loved to travel and spending time at Georgetown Lake. She served on the board of Highlands Hospice as well being an active pro-life supporter and board member of New Hope Pregnancy Center. Although she worked full time in their medical practice and was active with several community services, she always had time for her family and was her grandchildren’s number one fan at any of their activities. Peggy is survived by husband Dr. Robert St. John, daughters and sons-in-law, Terese Margaret “Terri” and Mark Winnings and Michelle Louise “Micki” and David Arnold all of Butte, son and daughter-in-law, Eric Robert and Stacy St. John of Great Falls. Surviving grandchildren include: Todd and Danielle Winnings of Texas and their children Alexandra and Kodie, Erin Winnings of Butte and her children Ivy Scharler, Diesel and Lux Dale, Marcus and Melissa Winnings of Butte and their children Trinity, Krista and Dallas Winnings, Brittaney Arnold of Missoula, Brodie and Bryan Arnold of Butte and Tyson, Tanner and Trey St. John all of Great Falls. Also surviving are her sister and brother-in-law, Marilyn and Lee Overbey, aunt and uncle, Margaret and Bibs Wedin, numerous nieces and nephews, several cousins, including Susan Meredith and JoAnn Lyons and her brother-in-law and sister-in-law, Don and Ann St. John of Butte. Besides her parents, Peggy is preceded in death by her brothers-in-law and sister-in-law, Reverend Brother Charles St. John and Ruth and F.B. “Babe” Simonich. And we would be remiss if we left out her beloved Yorkie, Zoe. Memorials in memory of Peggy may be made to the American Diabetes Association, New Hope Pregnancy Center, Holy Spirit Church or the Butte Catholic Education Fund.

The family of Margaret Elizabeth St. John created this Life Tributes page to make it easy to share your memories.