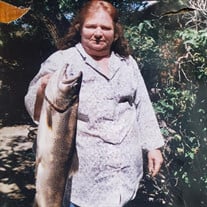 Not sure what to send?

Heaven acquired our angel Marie Fox (62) of Butte and returned her to our heavenly father on January 8th, 2022. Marie was born in Lewiston, Idaho on May 1st 1959 to Dick and Noryne Tift, but was ultimately raised by Noryne and Robert Clift mostly in Butte. Marie was married to Royce Fox Sr. on Dec. 2, 1979 and they were married 43 years; they had 3 children together and three grandchildren. Marie also had a son from a previous relationship. All her kids were raised and still live in Butte. Marie was caring, considerate, understanding, patient and protective of her kids, grand kids and family. These qualities made her a good wife, amazing mother, phenomenal grandmother and the best friend you could have. Even though Marie was riddled with sickness for the last two decades of life, she was always there for others to give encouragement and take interest in the day to day of all of those around her. Marie was also loving of her animals, which have been many! She was not a complainer and always had a goal in mind for herself and her children. It was the strength of her family and love for them that kept her going LONG past her odds! The younger Marie was avid in the outdoors and was well known to out fish and hunt everyone. She loved to be outdoors camping with her family. Later in life and through her sickness she was a school aid and heavily involved in the girl scouts even leading her daughter Gina's troop. If you did not know Marie, you surely have eaten some of her troops’ cookies. Her competitive nature helped as it was a contest to sell the most each passing year! She was always proud of her kids and the scouts and took pride in helping the cause. She was aware and thankful for what she had, which truly made her the kind of person the world needs more of. She will be missed but we know her spirit will remain on earth and beyond. Marie is preceded in death by her mother Noryne, father Dick, dad Robert, her sister Cheri Neal and brother and sister in-law Paul and Glenda Thurston. Marie is survived by her husband Royce Fox Sr., son Royce Fox Jr (RJ) (wife Marrissa, son August), daughter Tia Fox (husband Dennis Klates, children Sage and Journey), son Bobby Tift and her youngest daughter Gina Fox (boyfriend Jake), all of Butte. Marie is also survived by her sisters and brothers, Cassy Oddy, Pat Hill, Cleve Clift, and Lyle Tift. There are numerous spouses, nieces, nephews and friends who were all part of the extended family. A celebration of her life will take place at the Butte Brewery on June 12th 2022 from 1 to 5 pm and all are welcome to join. The family would like to thank Dr. Kautzman and her staff for the excellent care Marie always received. A small contribution to either of the Butte Humane Society or The Girl Scouts in her name would be appreciated in lieu of flowers.

Heaven acquired our angel Marie Fox (62) of Butte and returned her to our heavenly father on January 8th, 2022. Marie was born in Lewiston, Idaho on May 1st 1959 to Dick and Noryne Tift, but was ultimately raised by Noryne and Robert Clift mostly... View Obituary & Service Information

The family of Marie A. Fox created this Life Tributes page to make it easy to share your memories.

Heaven acquired our angel Marie Fox (62) of Butte and returned...